There aren't many clubs with a richer history of winning than AC Milan.

That famous striped shirt has been worn by a plethora of stars over the years and here we take a look at those players who shone brightest on the biggest stage. Be it the European Cup final, when Juventus came to town or the Derby della Madonnina, these Milan greats turned up when it mattered most.

A slight, elegant playmaker, Gianni Rivera was at the heart of Nereo Rocco's ​Milan side in the 1960s which won two Serie A titles and a pair of European Cups between 1961 and 1969.

Biggest Moment: Rivera assisted both goals in Milan's first ever European Cup win but it was their second time lifting the trophy which brought their number ten's greatest moment.

In 1969 Rivera orchestrated a 4-1 victory over Johan Cruyff's Ajax (who would go on to win three continental titles in a row a year later). With the captain's armband proudly on his arm, Rivera laid on two of the goals and generally ran the show, feeding Milan's front line.

Five minutes before the interval Rivera drove toward the Ajax penalty area before throwing a foot over the ball and back-heeling it into the path of the onrushing Pierino Prati to lash home Milan's second of the night.

In the second half Milan were 3-1 with 15 minutes still to be played when Rivera instantly tamed a bouncing ball fired into his feet in the centre-circle. A swift one-two later and the number ten has the freedom of Ajax's half to charge into. He rounds the goalkeeper but has been pushed too wide.

As though he's waiting for his kid in the back garden to get back onto his feet, Rivera turns in the box and seemingly takes an age to assess his options. When his teammates have finally gotten into position he scoops the ball over two Ajax defenders and onto the head of Prati to make it 4-1.

Possibly Milan's greatest ever player and maybe the game's best defender, Maldini's career is incredible just for its longevity let alone the trophies he won or the player he was.

Maldini played in 12 Coppa Italia and European Cup finals for I Rossoneri, winning half of them but, crucially, keeping six clean sheets on those occasions.

Biggest Moment: One of those clean sheets came on 18 May 1994 in the European Cup final against ​Barcelona. But this wasn't just any Barcelona, it was Johan Cruyff's 'Dream Team', who were coming into the game as massive favourites and on the back of four successive league titles. The Catalans were so confident of victory they even had photos taken with the trophy before the match.

In the absence of two of their first-choice defenders, Maldini stepped into the centre of defence from left-back. The Milan back line were perfect that night, denying Barcelona's all-star striking duo of Romário and ​Hristo Stoichkov a shot on target as they cruised to a 4-0 win.

His brace against Benfica helped us win our first European Cup ever: join us in wishing the great José Altafini a happy 79th birthday! ⚫ pic.twitter.com/DW9fsaj5E2

In the city of Milan, there isn't a bigger game than the Derby della Madonnina - when I Rossoneri face their bitter rivals, ​Inter.

On this big occasion, José Altafini, the Brazilian-born striker who would also represent Italy, rarely failed to deliver. In seven years with Milan he scored seven times against Inter and in March 1960, as Milan cantered to a 5-3 win over their rivals, Altafini became the first man to score four times in the derby (he remains the only player to have ever achieved this).

Biggest Moment: While a haul against Inter cemented his place in Milan folklore, it would be his brace in the 1963 European Cup final which saw his continental status secured.

In Wembley Stadium Milan went 1-0 down to Benfica as ​Eusébio thundered through their defence before slamming the ball into the far corner.

The Italians were still behind at halftime but with almost an hour gone Altafini swept in the equaliser, injuring himself in the process. Nevertheless, the striker picked himself up and ten minutes later he was through one-on-one with the goalkeeper.

Costa Pereira anticipated Altafini's attempted finish but the rebound mercifully dropped to the feet of Milan's number nine as he stabbed it in to secure the club's first ever European Cup. Kaká's legacy as one of the greats might have been tarnished by his injury-plagued stint with Real Madrid, but in his first spell at Milan, the tall, electric Brazilian was at the peak of his powers and the global game.

His time in Italy was defined by two ​Champions League finals against Liverpool. And while the first will be remembered for an improbable comeback, ​Kaká was actually superb in both games. In 2005, the playmaker wreaked havoc behind Hernán Crespo and Andriy Shevchenko.

His incredible pass for Milan's third in the first half was one of the great Champions League assists as he spun Steven Gerrard before finding Crespo's feet with just the goalkeeper to beat.

Biggest Moment: However, that night in Istanbul ended in agony. So, it was his performance two years later which sees him on this list. ​Kaká won the free-kick which led to Milan's first and in the final ten minutes he found himself in front of Liverpool's back line.

With a cluster of three red shirts between himself and the goal Kaká finds an impossible gap to slip the ball through as Filippo Inzaghi makes it 2-0 and the trauma of 2005 has been avenged.

During his time in the red and black of Milan, Marco van Basten was the best striker in European football. In fact, during a five year period as the '80s became the '90s, ​Van Basten won the Ballon d'Or three times - before Lionel Messi and Cristiano Ronaldo, this was almost unheard of.

The Dutchman was the club's top scorer for five consecutive seasons, despite his battle with injuries, and often saved his goals for the big occasions.

Biggest Moment: Van Basten scored twice in the 1989 European Cup final as Milan claimed their first of two consecutive continental titles under Arrigo Sacchi. On that night Milan were imperious against Steaua Bucuresti as they smashed four past the Romanian champions without reply, with Van Basten at his clinical best.

As Milan's second all-time top scorer, Shevchenko was one of few players to have thrived elsewhere in Europe after starting their career under the revolutionary Valeriy Lobanovskyi at Dynamo Kyiv.

The Ukrainian was a clinical striker in his prime, adept at scoring all types of goals, but he particularly specialised in those against Inter.

Biggest Moment: Milan's number seven scored arguably his most important goal against I Nerazzurri in the semi-final of the Champions League in 2003. Having played out a goalless draw in the first leg, Shevchenko gave I Rossoneri the lead in stoppage time of the first half.

Obafemi Martins equalised in the final ten minutes but because Milan were technically the away team for the second leg, Shevchenko's strike was enough to see them through to the final (which seems incredibly harsh given both sides share San Siro), where he scored the decisive spot-kick in the shoot-out to secure the title. 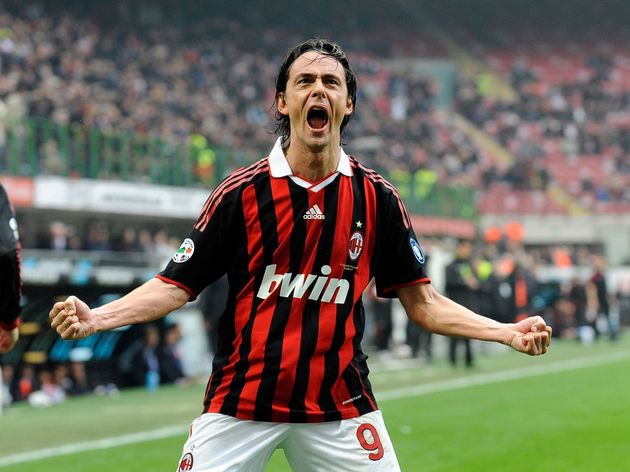 Filippo "Pippo" Inzaghi was not the most technically gifted footballer - the story goes that in his first training session with Milan, the squad burst out laughing at his attempts to complete a simple passing exercise - and he wasn't the strongest, or the fastest.

But he certainly knew how to score. And as a striker, that's pretty much all that matters.

Biggest Moment: Inzaghi didn't even make the squad for the 2005 Champions League final against ​Liverpool but he certainly made up for it two years later when the sides reconvened in Athens.

Inzaghi scored both of Milan's goals that night as they banished the demons of Istanbul. Each perfectly summed up the Italian's game.

His first was little more than Inzaghi walking in the way of Andrea Pirlo's free-kick as it cannoned off his upper body and past a helpless Pepe Reina. His second was made by Kaká as Inzaghi nipped in behind Liverpool's back line but the striker looked as if he may have started his run a fraction too early.

A fitting way to crown the night for a player who, according to Sir Alex Ferguson, was 'born offside'.