90min's Definitive A to Z of Everton

Given the current side's ongoing commitment to providing the wrong sort of entertainment, it's easy to forget that Everton are historically one of the most successful clubs in England.

Indeed, life at Goodison Park didn't always feature Michael Keane falling over his own feet, with so many of Britain's greatest talents making the blue side of Liverpool their home.

Starting from A and ending at Z, strap in for 26 essential facts about the Ev.

A is for Alan Ball 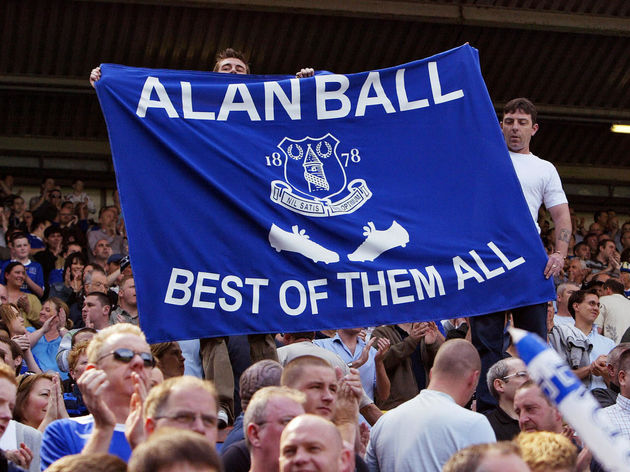 The World Cup winning winger with a striking head of red hair, Ball was a hero for club and country, and became England's most expensive player when he left Everton for Arsenal in 1971.

B is for Big Dunc and Leighton Baines

These two iconic players epitomise very different aspect of Everton's recent history - no one quite made the mixer his home like the brutal Duncan Ferguson,

Most Liverpool fans will try and tell you that The 1984/85 season is commonly regarded as the best in Everton's modern history,

There was football before 1992 you know!

Everton may not have made much of a splash in the Barclays, but Manchester City and Chelsea have a bit of catching up to do before they can match Everton's nine top-flight titles.

G is for Goodison Park This country's first ever purpose-built football ground, it doesn't get more old school than the Probably the toughest part of supporting Everton at the moment, enough said.

M is for David Moyes

Before he was memed into oblivion during his Manchester United spell, Moyes had a reputation as one of the best coaches in England, ensuring that Everton punched above their weight for many years.

N is for Neville Southall

You wouldn't know it from his wholesome Twitter presence, but this man struck the fear of God into strikers during Everton's glory days in the 80s, and also

O is for Owners

As anyone who has started a frustrating Football Manager save with them will know, it's only in recent years that they've started splashing the cash. Bill Kenwright steered a steady ship for many years, but can the ambitious Farhad Moshiri make the good times roll again?

P is for Paul Rideout

The journeyman striker had a very respectable, globetrotting career, but is also the scorer of the goal that brought Everton's most recent pot (the Community Shield aside), the 1995 FA Cup.

Q is for Queen's Head

 #OnThisDay 2 years ago, Wayne Rooney scored from beyond the halfway line to complete his hattrick in Everton’s 4-0 win over West Ham at Goodison Park pic.twitter.com/DMbXepc5d8

The Everton wonderkid went to Manchester United, became a legend, and then made sure to save one last filthy halfway-line goal for his return to Goodison.

S is for Gylfi Sigurdsson

The trundling Icelandic playmaker has the current honour of being Everton's record signing, and hasn't quite provided value for £40m just yet.

T is for Top Flight

Everton have missed just FOUR top-flight seasons since 1888 - you don't get a trophy for that, but you should!

U is for David Unsworth

As with fellow caretaker manager Duncan Ferguson, Unsworth was another iconic hard man at the turn of the 21st century who hit each ball like it was his last, as shown by this rocket against Newcastle on an appalling pitch.

V is for Villarreal

Though, as established, there was footy before 1992, a heartbreaking, controversial qualifier against the Spanish club was the closest the Toffees got to the modern Champions League, way back in 2005.

W is for World Wars

As the immediate First Division champions before both World Wars broke out, Everton got to hold on to their respective crowns for a combined 11 years across the global conflicts - very crafty.

Hopefully the next time they claim the crown it won't be such a bad omen.

X is for UneXpected players

Shokdran Mustafi, Eric Dier, John Ruddy... A lot of random players have passed through Everton at some point in their career.

Y is for Alex Young

I was tempted to include Yakubu, but this revered Scottish attacker, known as 'the Golden Vision', has one of football's great nicknames.

Z is for Z Cars

What better way to end this list than the cheerful and only slightly annoying tune which brings the Everton players onto the Goodison pitch.