And only Liverpool would allow Andrey Arshavin to score FOUR on the Anfield turf to put the brakes on their title assault in the 2008/09 campaign.

Okay, maybe that's all a bit rich coming from a Spurs fan. But when an under-strength Arsenal side rocked up to the red side of the Mersey on 21 April 2009, the Reds had a chance to take a two-point lead at the top of the table over Manchester United.

The encounter itself certainly wasn't one for tactical buffs, but it was the perfect amalgamation of late-2000s Premier League football: frenetic and intense with some of Europe's finest talents on display.

In an error-ridden contest, Fernando Torres cancelled out Arshavin's opener with an imperious header before Liverpool took a second-half lead through a scrappy Yossi Benayoun 'headed' finish. Jamie Carragher and Fabio Aurelio then set up Arshavin for his second and third strikes of the evening as the Gunners restored their 3-2 lead.

The Russian then bagged an incredible fourth in the final minute of normal time after an iconically headbanded Torres had equalised 15 minutes earlier. Benayoun then provided one final twist, however, scuffing home from inside the area after the loose ball fell to the onrushing Israeli.

There was remarkably little made about Benayoun’s goal from either side. It was hectic. It was shambolic. It was ridiculous. It wasn't even unexpected any more.

It would've taken a while for Rafa Benitez to have gotten over this performance and result. For such a disciplined and tactically stringent coach, the 4-4 classic was an absolute nightmare for the Spaniard, as three individual errors and a poorly taken set-piece gifted the Gunners their four goals.

While they were impressive going forward and able to sustain attacks like Jurgen Klopp's current side, defensively they were shambolic - with the normally so reliable pivot of Xabi Alonso and Javier Mascherano failing to cope with the fluid nature of Arsenal's midfield, thus struggling to provide ample protection for Liverpool's sub-par back-four, especially on the counter.

The draw was the only blemish on a remarkable 11-game unbeaten run to round off the campaign and despite United winning the title by a four-point margin, you feel that if the Reds were able to secure the win that Tuesday night things may well have turned out different. 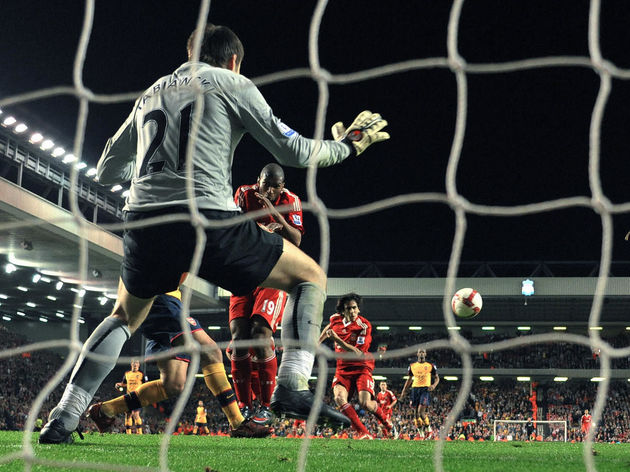 A hugely underrated performer throughout his Premier League career, Benayoun enjoyed a fine night - scoring twice with, well, not exactly the cleanest pair of strikes you'll ever see.

But it wasn't just his brace that made Benayoun's stellar performance, the Israeli was a constant menace in and out of possession all night; occupying dangerous positions between the lines while persistently hassling the Arsenal side when the Reds didn't have the ball.

He certainly didn't deserve to be on the losing side that night, and when the loose ball fell to him inside the area in the third minute of added time, Benayoun sliced the ball into the corner to ensure he wasn't.

No Emmanuel Adebayor and Robin van Persie? No problem, as an inferior Arsenal While they were under siege for much of the contest and certainly reliant on Lukasz Fabianski between the sticks, Arsene Wenger's side counter-pressed to tremendous effect to often catch Liverpool out high up the pitch before proving deadly in attacking transition as the Reds desperately searched for goals.

Wenger's decision to bring on Walcott was an obvious one, and it worked a treat as the former England international set up Arshavin for what looked to be the winner following a rapid counter-attack.

The visitors themselves, however, were also victim to individual errors: Bacary Sagna horrifically sliced his clearance into the path of Dirk Kuyt for Torres' expertly taken header, while Fabianski should've got a stronger palm on the Spaniard's second strike. Signed in the winter window following a brilliant campaign with Russia at Euro 2008, this was the night Arshavin wrote his name in Premier League

He joined an exclusive list of sharp-shooters to have scored four goals in one game, so let's take a look at his four goals:

Goal One (39'): A combination of Fabregas and Nasri dispossessed Mascherano on the edge of his box before the former cut back to the Russian who made no mistake with his left-foot from eight-yards out.

Goal Two (67'): Arshavin nipped in front of Alvaro Arbeloa to intercept Carragher's headed pass before unleashing an incredible strike from range which swerved away to beat Pepe Reina. Superb technique.

Goal Three (70'): Aurelio inexplicably laid his attempted clearance on a plate for the possessed Russian, who settled himself with a fine first touch before firing through Reina for his hat-trick from 12 yards. Goal Four (90'): The Gunners broke to deadly effect from a Liverpool corner, with substitute Walcott picking out a marauding Arshavin. With all the time and space in the world, the diminutive winger made no mistake, crashing another left-footed effort home at Reina's near post. In the surreal nature of the contest, however, that strike still didn't prove the winner. Arsenal's Yellow Away Strips: It's fair to say that the current away strip donned by Pierre-Emerick Aubameyang and co. is a monumental upgrade on the murky yellow number on display in 2009.

Lukasz Fabianski: There was a reason why Gooners labelled the Pole 'Flappy-Handski' during his time at the Emirates. Fabianski was one of the very few who made Manuel Almunia look competent. And despite a fine first-half performance at Anfield in 2009, he still went on to concede four - one he certainly should've done better with. Nevertheless, Fabianski would go on to establish himself as one of the Premier League's most reliable shot-stoppers at Swansea and now West Ham. Rafa Benitez: Following the domestic highs of 2008/09, the 2009/10 campaign was one to forget for Benitez. Liverpool

Fernando Torres: In his prime, he was untouchable. The headband, the Total90 boots, the long-sleeved adidas shirt - defenders were in serious trouble. The Spaniard followed his 14-goal campaign that season with 18 Premier League goals in 2009/10 before things went south. He forced a move away from Anfield and ended up at Chelsea, where apart from that one Gary Neville-elevated moment, he simply wasn't the same. Albert Riera: A typical Benitez wide midfielder due to his unimaginative nature in possession and stellar defensive work-rate - see his masterclass in shutting down Real Madrid's Arjen Robben - Riera was below the standard quality to win titles and was sold in 2010 following a spat with his Spanish boss.

Nabil El Zhar: Good luck remembering El Zhar if a Sporcle quiz about this classic encounter ever pops up.

Denilson: The mightily talented Brazilian who was converted by Arsene Wenger into a pure defensive midfielder in a bid to find their Claude Makelele. It didn't work. Talent down the drain. Liverpool didn't win the league despite winning their final five Premier League games at a canter.

Despite getting steamrolled by Chelsea