As the days pass by, people are beginning to get increasingly bored while in lockdown as there is only so much Netflix one can watch.

March 29 may not be the most relevant date in the football calendar, but plenty of things have still happened on this day in football over the years.

So, without further ado, stop your TV series of films for just 15 minutes and enjoy a trip back through time.

️ On This Day in 2008, Derby became the 1st Premier League club to be relegated in March

Yep, you read that right. Derby County were relegated before the end of March.

Possibly one of the worst sides to ever grace the Premier League, they somehow only won one game all season and recorded just 11 points in the table.

To escape relegation they would have needed an extra 26 points - which is even more than ​Liverpool's ridiculous lead at the top of the league table now.

This eight-goal thriller provided some exciting entertainment for football fans in a match that included the likes of Alan Shearer, Jermaine Jenas and Duncan Ferguson.

The win helped boost the ​Magpies' chances of securing a Champions League place and they finished the season in fourth ahead of Leeds United and Chelsea.

On the other hand, this was the first loss for Toffee's manager David Moyes but he managed to steer the club clear of relegation which had been a genuine threat before his appointment. 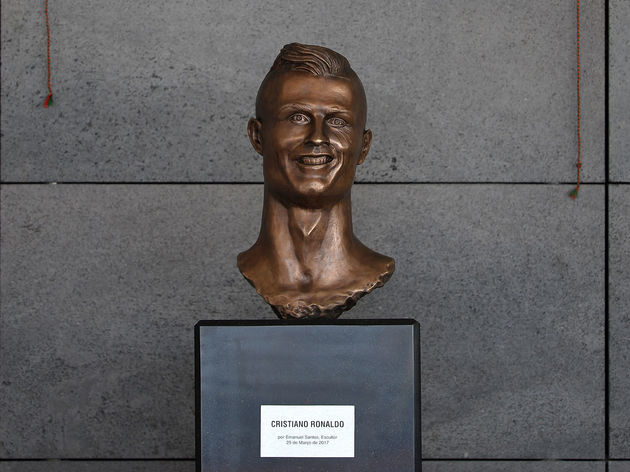 One of the greatest footballers in history depicted as a nightmarish, ridiculous-looking joke. The sculpture of the Portuguese superstar was meant to honour the renaming of the Madeira International Airport to the ​Cristiano Ronaldo Airport. It backfired.

The man who produced this fine piece of work is Emmanuel Santos, who has since had another attempt at the sculpture, head to Google to see if you think it's an improvement.

This time, it's Newcastle who are on the end of an absolute thumping.

Former Tottenham manager Mauricio Pochettino oversaw a delightful Saints performance as England trio Rickie Lambert, Jay Rodriguez and Adam Lallana all featured on the scoresheet. It was also during this time that young left-back Luke Shaw was beginning to make a name for himself.

Southampton finished a brilliant year in eighth position, only one place behind ​Manchester United. Rumoured to have the cheekiest smile on the planet,

The season after, he won the Premier League with ​Chelsea and to top it all off - he won the World Cup the following year.

One of the most loved footballers out there, Kanté celebrates his 29th birthday today, and to celebrate he has probably gone for a 10k run around his house!

A REMINDER:#OnThisDay 1998
Francesco Totti produced this filthy chip on his left foot over Gianluigi Buffon 

The result itself is not particularly noteworthy, however, it's the delightful chip from Roma legend Francesco Totti takes your breath away.

The perfectly weighted dink left Italian legend Gianluigi Buffon completely beaten and gave Roma the win with the only goal of the game.

They finished the season just outside of the top four though, as Milan claimed the Scudetto and a lowly Juventus finished seventh.