2 July 2010. A time when footballs had a mind of their own and vuvuzelas were forcing us all to watch matches on mute.

​That's right. The 2010 World Cup was upon us, and the entire planet was gripped by football fever once again. Among the front runners for the trophy were all the usual suspects, including Brazil.

The group stages saw a couple of huge shocks, as the 2006 champions and losing finalists Italy and France both crashed out, finishing bottom of their table.

The other heavyweights progressed nicely though, and few surprises in the Round of 16 led to a set of mouth-watering quarter-final ties. One of those much anticipated clashes, was Netherlands versus Brazil. And this is how it unfolded.

Netherlands received an early scare when Robinho tapped home in the opening minutes, but his goal was ruled out for offside. The Dutch had to learn their lesson from that close call. They didn't. Robinho broke the deadlock only a matter of minutes later, when Felipe Melo fizzed a defence-splitting ball through the Netherlands backline, and the Brazilian forward fired home first time to give the favourites the lead. ​Brazil started the second half quickly, but they were rocked on 53 minutes, when Melo flicked a header beyond Julio Cesar and into his own net. Things went from bad to worse for the

Netherlands' display against Brazil summed up their entire tournament in 90 minutes. This Dutch side was far from its best, and there were some very clear deficiencies throughout the team. The goalkeeper and defence boasted some average names, and they struggled to create many clear opportunities. But what Holland did have was organisation and spirit in abundance, and a coach who drilled them to devastating effect.

Robben put in one of the most selfless and dogged performances of his career against Brazil. In a game in which Netherlands saw very little of the ball - especially in the opening 45 minutes, Robben was a constant outlet for the The ex-​Chelsea man's tireless running and neat dribbling skills forced Dunga into substituting left-back Michel Bastos, who simply couldn't live with the never-ending pace and power of the winger. Robben then drew the red card which ultimately put the game out of Brazil's reach, winding up Melo to the point that a stamp seemed to be the only option.

Oh yeah, and it was his lethal deliveries which caused both goals, as the Brazil backline had no answer for his wicked crosses. What a huge performance on a huge occasion. ​What a sensational player Kaka was on his day. Robinho got the goal for Brazil, but Kaka was just as involved for Dunga's side. The attacking midfielder was so unlucky not to get his name on the scoresheet on a number of occasions, and his linkup play with the aforementioned Robinho and Fabiano was nothing short of superb. 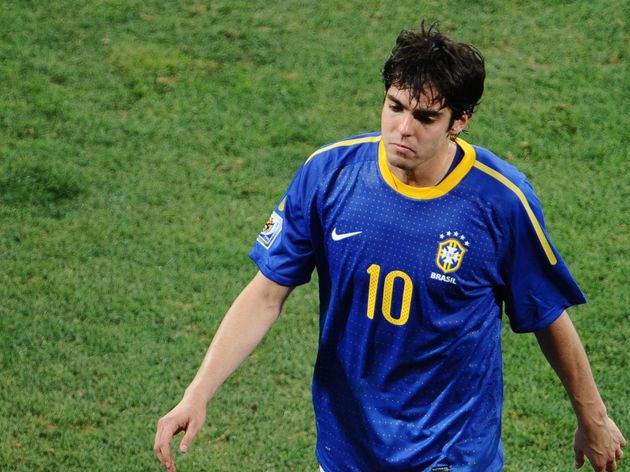 Kaka worked excellently in tight spaces, using his quick feet to flick the ball beyond defenders and into the path of his teammates, while breaking the lines nicely to run at a panicking Netherlands defence.

An unbelievable player, and one who deserved better than a quarter-final exit.

Robinho. The Brazil star had the world at his feet, and he was sensational in that quarter-final clash with Netherlands. But Robinho failed to live up to the hype that followed his career, and his life took a dark turn when he was convicted of some pretty vile crimes relating to his time at Milan. They say form is temporary, but class is permanent. And although Kaka struggled to hit the heights expected of him throughout his career, he still went on to become a football legend.

You called the @adidasuk rent-a-Pred hotline for a player, I answered. Thank you London , it was a pleasure! The #Predator is definitely % unfair! pic.twitter.com/Iq4L9NQjcm

Not to mention, he's still doing the business on the amateur pitches of London, too. You can't keep a good man down. Goodness, this Netherlands side came close to unprecedented glory, didn't they? After shocking the Brazilians, Holland came out on top in a pulsating 3-2 victory over Uruguay, setting up a historic final with Spain. Ultimately, they fell painfully short, taking their opponents all the way to extra-time, before succumbing to a late, late Andres Iniesta winner. Heartbreak. As for Brazil, the post-World Cup fallout saw coach Dunga lose his job. He'll be back in a few years though, don't worry. Despite all the hope and expectations surrounding the

Why was Robinho so angry for the entire 90 minutes?

Who thought vuvuzelas would be a good addition to a football stadium?