This was not supposed to happen.

Long before great escapes, Premier League titles and Champions League campaigns had been toasted at the King Power Stadium, Leicester were simply trying to tread water in their first season back in the top flight for a decade. 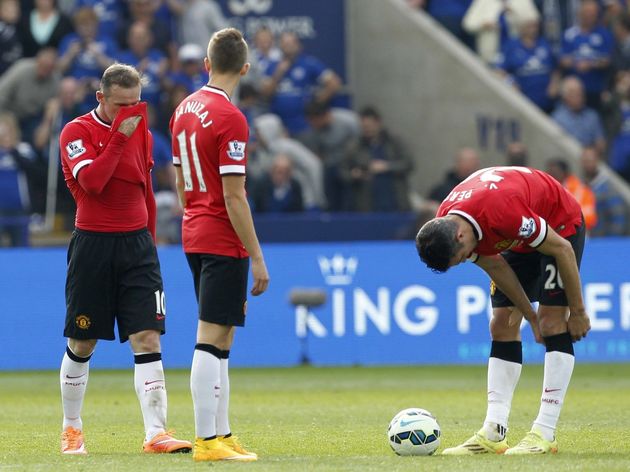 One of the most dramatic upsets in ​Premier League history seemed unfathomable when a sublime Angel Di Maria chip made it 2-0 to the visitors in the 16th minute.

Even if Leonardo Ulloa's header seconds later had given the Foxes a spark of hope, Ander Herrera's fortunate finish extinguish it just before the hour mark. And then... Jamie Vardy happened.

It all started - as it so often does - with Vardy chasing down a lost cause. Hunting Rafael all the way down to his own byline the future record breaker shrugged off the defender before being brought down to win Leicester a penalty - which David Nugent leathered home.

Two minutes later, the hosts had their equaliser. Fans could scarcely believe their eyes once again as the Argentine's effort squeezed past David de Gea in the United goal to make it 3-3.

The goal was greeted by a sonic eruption around King Power Stadium but that was nothing compared to the noise when Vardy grabbed a goal of his own ten minutes from time.

With Juan Mata caught in possession by Ritchie de Laet, the former United youth player exploded down the right flank before sliding it to Leicester's number nine, who had peeled off his marker expertly. 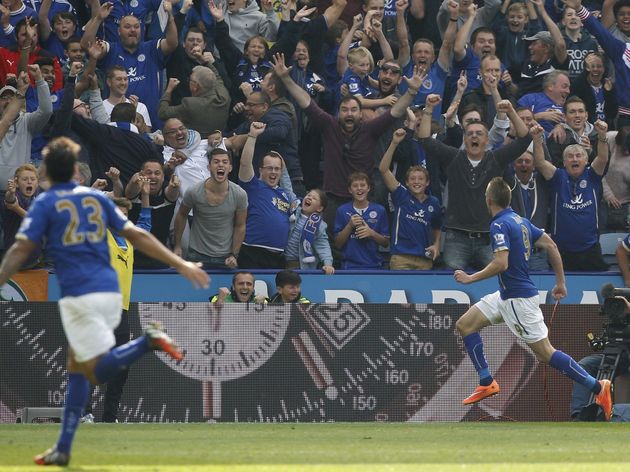 With only De Gea to beat, Vardy could have been forgiven for feeling a little nervous - what with this being his chance for a first ever Premier League goal. If he was, he didn't show it - slotting it past the best goalkeeper in the world with the same confidence he had exhibited when dominating the Northern League with Stocksbridge Park Steels several years earlier.

4-3 would have been more than enough to send the Filbert Way faithful home to enjoy one of the most euphoric Sunday roasts of their lives, but Vardy was not content and made his fans' potatoes taste even sweeter by creating a fifth goal.

After shrugging off the lumbering Tyler Blackett, he raced into the box before Blackett hacked him to the ground - earning himself a red card and gifting Leicester another penalty. With Nugent sat on the bench, Ulloa rose to the task and belted home from 12-yards to put the gloss on one of the best days in Leicester's recent history. Charging past a string of players and into the Leicester half, the Argentine played a quick one-two with Wayne Rooney before finishing in the most audacious way possible.

With Kasper Schmeichel a yard or so off his line, Di Maria managed to scoop the ball over the Dane while still on the move. The undoubted highlight of his largely underwhelming United career. ​His incredible performance - one goal and four assists - against United gave a brief glimpse into the heights that Jamie Vardy's career would reach.

The Englishman's inaugural Premier League strike has been replicated countless times in subsequent seasons, and he now stands just one goal shy of entering the illustrious top flight hundred club.

Thank god he got rid of that bloody mohawk though. United centre-back Tyler Blackett did not cover himself in glory against Leicester and it will come as no surprise that he dropped down to the Championship with Reading in 2016 - where he continues to frighten fans with some questionable decision making.

Dean Hammond - who was part of Leicester's midfield three - currently turns out for Worthing in the Isthmian League. Well, he did until recently for obvious reasons.

Ritchie de Laet who assisted Leicester's fourth goal in currently back in his native Belgium, while Paul Konchesky has now retired - enjoying a final pay day at Billericay Town a few years ago.

An unused substitute for the Foxes that day was Riyad Mahrez. Wonder whatever happened to him? ​After this victory, Leicester's season went into a tailspin as they failed to win any of their subsequent 13 games.