Brazil 3-3 Italy: The Inconspicuous Friendly Which Became One of the Greatest Games Ever

France and England make up the rest of the field in a competition which, despite containing some of the best sides in the world, is basically a kick about. A loosener. A PR event. A metaphorical lazy river in the theme park of international football, which meanders down to football authority pockets. Then all of a sudden, BANG.

The most exciting, heart thumping, mouth-watering, palm sweating, head scratching, awe inspiring (and ultimately meaningless) game of football you have ever seen in your life.

With reckless abandon these two sides ran at each other full pelt from the first whistle. Both coaches could only watch on, like two coaches of under-six teams who had spent days asking their kids to maintain some semblance of a formation, only for the ref to blow his whistle and both keepers to sprint towards the half-way line chasing the ball.

The tone for the evening was set when Alessandro Del Piero nodded home Christian Vieri’s sublime cross in the seventh minute. A calamitous own goal apiece saw the sides head into the break with Italy edging the contest 2-1. Del Piero’s emphatic penalty seemed to have handed the Italians the three points just past the hour mark, but never write off a side boasting a strike force of Ronaldo and Romario.

The lethal duo both produced a piece of magic to rescue their side a point and leave both sides looking at each other like two confused siblings who had forgotten what they started fighting over.

Ronaldo Luis Nazario de Lima, known simply to me and you as Ronaldo.

Forget Cristiano, this man is Ronaldo. The original, the dominator, the one everybody wanted to watch and the one who will forever forever be the greatest Ronaldo.

If you needed evidence of that claim, this game highlighted what a talent Ronaldo was. Martialed by arguably the greatest defence of all time, he didn’t have a kick for large portions of the game - yet still managed to hit the post and score a fantastic goal.

On the few occasions he did get the ball, it was clear for all to see just what a class above he was. 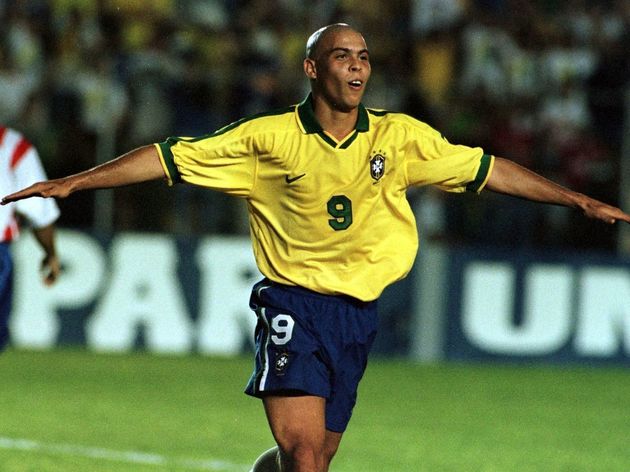 It’s a bit of a beaten track, but just how good could he have been had injuries not stalled his career?

Many consider Zinedine Zidane to be the greatest footballer of this generation, but had Ronaldo not suffered multiple, recurring, knee injuries, there's every chance that he'd be remembered as the greatest of his - and maybe all - time.

Kept his cool when many around him were beginning to flap. Brazil aren’t known for their solid defences, and this team was no different. Some kamikaze defending allowed Italy through on goal on multiple occasions, with even the reliable Cafu enduring a nightmare against the legendary Paolo Maldini.

But Dunga was cut from a different cloth. Rarely giving the ball away and producing multiple decisive passes to break the lines, Brazil's skipper found a way to combat Italy's three man central midfield - despite being outnumbered.

How oh how did this side win absolutely nothing?

World Cup 1994 runner-up, Euro 2000 runner-up, by the time Italy secured World Cup glory in 2006 there were only Fabio Cannavaro, Filippo Inzaghi and Del Piero remaining from this squad. An astounding stat when you consider they absolutely tore apart the reigning world champions in this match.

It’s a little rich to be waxing lyrical about a defence which conceded three times, but the fact is Italy were undone by a fluke own goal and two pieces of magic from two of the greatest goal scorers ever to grace the game. That aside, their defensive display in this match up was absolutely fantastic. The shoots of a partnership between Vieri and 22-year-old Del Piero were already there for all to see, with Vieri winning everything aerially and Del Piero instinctively picking up anything the big man flicked on.

Couple that with young blood such as Gianluigi Buffon, Alessandro Nesta and Inzaghi already settling in Serie A, it’s a travesty this side didn’t win anything.

Put simply, an absolute genius of a footballer.

Media bravado in the modern game will tell you Pep Guardiola has changed the game and invented attacking full-backs. Well let me tell you, attacking full-backs are a step back from a full-back that can defend as well as attack, and that’s exactly what Maldini could do. 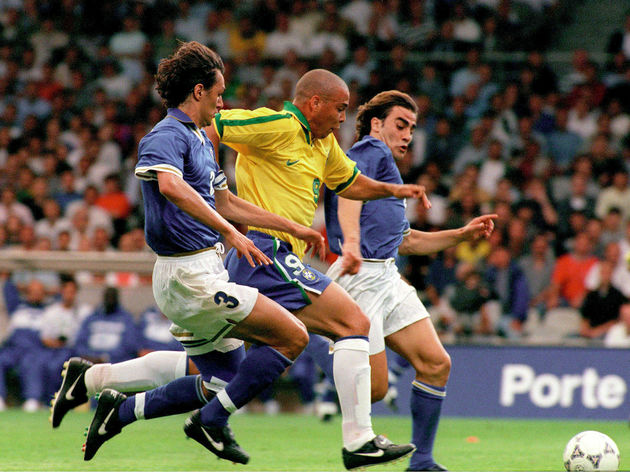 The ​AC Milan man was as dangerous in the Brazil half as he was imperious in the Italy half, working up and down the channel without breaking a sweat. He continuously stretched the Brazilian defence with his movement and with his defence splitting balls over the top.

Perhaps the greatest compliment you could pay Maldini is he made Cafu look absolutely useless.

The Ro-Ro partnership. In 1997, they were the most lethal duo in international football, bagging a sensational 34 international goals between them in one calendar year. However, this was as good as it got. Romario failed to be picked for either World Cup 1998 or World Cup 2002 and made only fleeting appearances from then on. Coupled with Ronaldo’s injury woes, the pair would rarely be seen together again.

If there’s any justice in the world, one other thing which will have aged badly is the Italian squad’s hairlines. With their partly untucked shirts and dark, waving locks, I’ve never seen a bunch of such cool looking b*******. Shout out to Attilio Lombardo at right-back, the visionary sporting a haircut like my Grandad at just 31 years old. 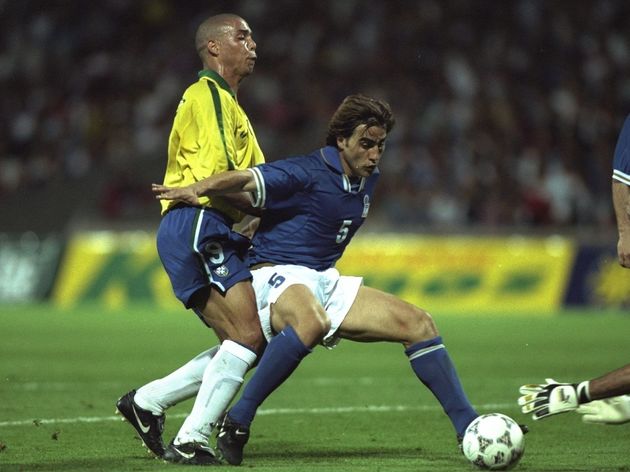 Also, the Maldini and Cannavaro partnership. At just 23 years of age, Cannavaro was already beginning to show signs of a future Ballon d’Or winner; composed, tough and pacy, the future World Cup winner will undoubtably have benefitted from playing alongside arguably the greatest defender of all time.

Del Piero, Inzaghi, Cannavaro, Vieri, Maldini, Romario, Ronaldo, Dunga, Cafu, Roberto Carlos…. how are you supposed to pluck a player out of these two teams that anyone could forget? Although, on a similar note, Dino Baggio played for Blackburn…huh?

There’s a quite beautiful irony amid all the drama of this completely meaningless match, in that these two sides went at each other hammer and tong for 90 minutes, only to produce a result which meant neither of them could win the tournament. The draw meant England were crowned winners of the World Cup 1998 prequel.

At the following year’s major event, Italy were knocked out in the quarter-finals on penalties against eventual winners France, while Brazil made it to the final only to be humbled by the hosts 3-0.

What could have been of Brazil in 1998 had Romario gone to France?

Is Lombardo the Italian Benjamin Button and is now sporting long, flowing locks while Demetrio Albertini has a baldy?