Instead, we'll have to make do with some memories from this day in history, which has seen plenty of debuts, some big wins and a contender for the greatest goal in Premier League history. What a day.

Let's take a look at the best moments from 26 March.

​Manchester City and ​Liverpool have had some memorable battles in recent years, but back in 1937, it was all City.

The Citizens stormed to a 5-0 win over Liverpool to extend their unbeaten run to 13 games​, and they used that momentum to go on and win the league title, leaving Liverpool floundering in 18th.

City managed to win by the same scoreline in 2017, but it's Liverpool who are laughing these days.

Start your day with a Reds retro rewind ⏪#OnThisDay in 1983, we beat @ManUtd at Wembley to win our third consecutive League Cup  pic.twitter.com/TJXMTzpVnU

Liverpool legend Bob Paisley retired at the end of the 1982/83 season, but not before leading his side to a 2-1 win over ​Manchester United to win his final League Cup (which was then the fantastically named Milk Cup).

It was the Reds' third consecutive triumph, and the players all insisted Paisley be the man to collect the trophy as it was the last final he would ever manage in.​ With 48 goals in 80 appearances, Gary Lineker sits third on England's all-time scoring charts, and he opened his account on this day in 1985 in a 2-1 win over the Republic of Ireland.

Trevor Steven also scored his first international goal in that game, but he only managed three more throughout his career.

In 1988, a 17-year-old striker by the name of Alan Shearer made his senior debut as a substitute for ​Southampton in a 1-0 win over ​Chelsea.

His final match came 18 years later, but only after he had fired 260 goals to become the ​Premier League's all-time leading goalscorer. Not bad.​

One of the most iconic goals in Premier League history was scored on this day by ​West Ham United's Paolo Di Canio, who pulled out that scissor kick to lead his team to a 2-1 win over Wimbledon.

It was a thoroughly underwhelming game, but nobody cares about that. It's all about this goal. Celtic came to Ibrox in 2000 in the knowledge that anything less than a win would effectively gift runaway league leaders Rangers the title. It's safe to say that things didn't go to plan.

Jörg Albertz opened the scoring for Dick Advocaat's side after just four minutes, before goals from 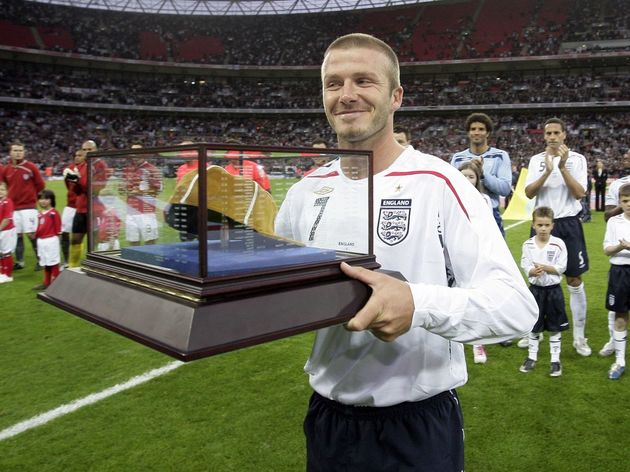 David Beckham became just the fifth man in history to win 100 England caps in 2008 when he turned out for the Three Lions in a 1-0 loss to France.​

He went on to pick up another 15 caps, which currently has him third on England's all-time appearance list behind Wayne Rooney and Peter Shilton.

3 - On this day in 2008, the Netherlands managed to beat Austria 3-4 despite going down 3-0 in the first 35 minutes, it is the only time in history the Dutch national team have won a game after trailing by three goals. Climb. pic.twitter.com/ypWppAkIM9

Austria had the Netherlands stunned on this day in 2008 when they raced out to a 3-0 lead after just 36 minutes of their friendly match, but it was the visitors who would have the last laugh. In the build-up to Euro 2016, Roy Hodgson led his young England side to a memorable 3-2 win over Germany in Berlin.

Goals from ​Harry Kane and ​Jamie Vardy had brought England level from two goals down, before ​Eric Dier rose to head home from a corner in the 91st minute to complete a stunning comeback for the Three Lions.​