Brothers Sean and Matty Longstaff are currently changing agents as they seek to resolve the uncertainty surrounding their Newcastle futures.

Matty, the younger brother, will see his contract expire in the summer and is free to negotiate terms for a potential move with other clubs in Europe, while Sean still has a couple of years left to run on his current deal.

Matty made a name for himself when he produced a match-winning performance against Manchester United in October. He impressed further with a goal against the Red Devils in the reverse fixture at Old Trafford on Boxing Day.

3 - Matty Longstaff has become the third player to score both of his first two @premierleague goals in two separate appearances against Manchester United, after Fredrik Ljungberg in 1999 and Leighton Baines in 2006. Niche. #MUNNEW pic.twitter.com/Tp12BfGfUK

In any case, Magpies boss Steve Bruce had a word or two to say over the future of his young midfield star, imploring him to base his decision on football rather than finances. As previously ​repo​rted earlier this week, a host of sides are interested in signing the young midfielder.

Bruce's club face the prospect of Matty leaving the club for as little as £350,000. Several Italian clubs are thought to be interested in the young Englishman, but the ongoing coronavirus pandemic would make any potentially imminent move unlikely.

However, as reported by ​Sky Sports, Newcastle currently have no contract offer on the table for the teenager, despite three months of negotiations. In a bid to resolve the duo's futures, they have pressed ahead in switching representatives. 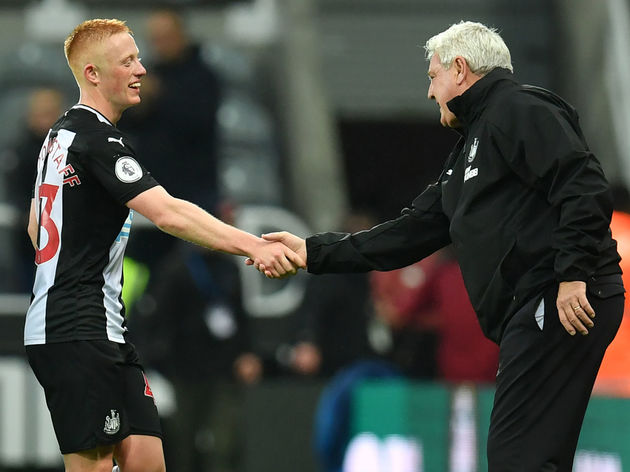 Bruce stated earlier this month: "We all want him to stay, but players have their prerogative. Of course it's a concern. I just hope that he looks at it as a football decision. Ultimately, when you are 19, it is about how you look after your career, rather than anything else.

"I'm pretty sure there are people in his ear, and distractions. At the end of the day, if you have a successful career, money will find you."

Bruce added: "He's a 19-year-old who has done very well. Tell me another 19-year-old who's played in the ​Premier League this year? There's not many.

"I hope he finds a conclusion with the club, I really do. He knows what I think of him." So the future of Matty is far from certain, but at least ​Newcastle fans can feel slightly more confident that older brother Sean will likely stick around on Tyneside for a while longer. He currently has two years remaining on his contract.

Sean was a serious transfer target for ​United last summer, who were quoted a staggering £50m to secure his services.

Put simply - Newcastle didn't want to lose him and were in a strong position to ensure that didn't happen. But Longstaff junior's situation is one they have less control over and one they will rue if it results in the talented youngster leaving St James' Park in the summer.