​Manchester United could face opposition from Shanghai Shenhua in their attempts to sign on-loan forward Odion Ighalo on a permanent transfer this summer, with the Nigerian’s parent club now reported to have offered him a new contract and huge pay day to stay with them.

Ighalo has scored four times in eight appearances for United since agreeing the temporary switch to Old Trafford in the final hours of the January transfer window. The move realised a boyhood dream for Ighalo, who grew up watching United back home in Nigeria and ​idolised Andrew Cole and Dwight Yorke, and he even took a pay cut for it to happen.

He has done exactly what has been asked of him, providing relief to the club’s usual starters in cup competitions, while his impressive attitude and application increasingly looks as though it will be rewarded with a permanent contract in the coming months.

Manager Ole Gunnar Solskjaer has not been shy in his praise of the player.

“Odion has come in really well and he will improve and get better. But he has qualities we saw in him and needed and we need those qualities for next season,” the United boss said this month. 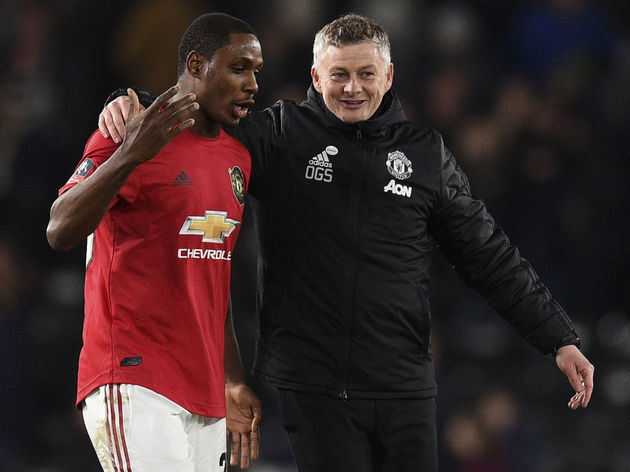 “He’s a goal-scorer and a striker. He doesn’t worry too much about build up play. He knows his job and role in the team, and he’s very good with his back to goal. He’s a great link player, but maybe the best thing about him is his personality. He’s got the whole lot really.”

Just this week, United have been tipped to pay a £15m transfer fee to make it permanent, while The Independent later reported that Shanghai are ‘on the verge’ of signing a replacement in the shape of fellow countryman and ex-Premier League forward Obafemi Martins.

35-year-old Martins has already had one stint with the club, which came to an end in 2018.

However, there could be a spanner in the works for United based on the latest addition to the developing saga from Sky Sports, who claim that Ighalo has been offered a two-year extension by Shanghai worth an astounding £400,000 per week, before tax.

That would run until the end of the 2024 Chinese season, making the deal as a whole worth in excess of £80m overall over the next four years, again before tax.

Sky suggests that Shanghai are looking to reward Ighalo for his form with United, with the player himself said to be ‘flattered’ by the offer. But his immediate focus is currently with his loan club and he will wait to see what permanents he is offered at Old Trafford before making a decision.

Ighalo’s clear love for United has already made him a cult hero among fans.