​Remembering. We're doing a lot of that right now. And for obvious reasons.

So while we're lying in bed, staring up at the ceiling and reminiscing about the good ol' days when 22 players running around on grass kicking a ball wasn't mere fantasy or digitally animated, we start to think.

Initially, we hark back to watching our beloved club's finest moments, be it lifting titles or narrowly dodging relegation on the final day of the season. But there is only so long that can last. Thus, instead, we stretch the parameters of our footballing know-how to the more obscure. Because, at this point, we're desperate for football in any capacity, no matter how old or how chillingly average it may be.

But every now and then you remember something special. Something that was always there, stored away in aisle 206 of your thinking box, but one you'd forgotten about amid the ongoing crisis we find ourselves in.

Sure, when Tugay moved to Ewood Park from Rangers he was only 30 years old, but very few players unearth their finest spells beyond that fateful number.

Tugay did, though. Tugay really did.

Overused, perhaps, but legitimately the best way to describe the Turkish midfielder. He would score 13 goals during his 270-game Rovers career, earning heroic status as one of the club's, and indeed the league's, finest midfielders.

With youth still on his side, he would often be deployed as a deep-lying playmaker during his earlier career in Lancashire. Here, his best attributes would come to the fore. Be it tough tackling - which he did plenty of - precise ball distribution, threaded killer passes or having an almighty pop at goal, nothing was out of the reach of his ability.

Previously captain of Galatasaray at the tender age of 22, the ceiling for his talents was sky-high. An illustrious spell in Turkey saw him lift six league crowns along with nine other domestic titles, which is why his two-season spell at Ibrox was surprising in its 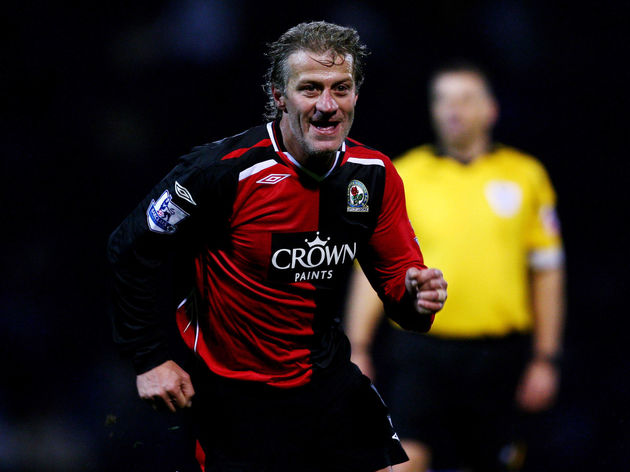 Whether it was the supposed dressing room unrest he spoke of upon his departure, or lack of consensus with manager Dick Advocaat, it just didn't flourish as hoped.

Blackburn's success is still relevant in the modern game. They remain one of only six teams to win the Premier League, and their status as one of the biggest clubs on these shores is - and will remain - in tact.

But without a trophy success since 2001, it's the players who've donned the famous shirt who spark the most discussion. Tugay is one such man.

He played with a grace that is often unseen for a man of his stature, with few facets of his game requiring any tinkering. Given the level of praise I'm bestowing upon him, naturally questions will be asked as to why he didn't move to one of 'big six' sides. Simple answer: age.

Tugay grew better with each year he spent in the north west, finally hanging up his boots in 2009 at the age of 39. Had the Turk joined the club five years sooner and replicated such form, there is no doubting he'd have been a Champions League player.

In 2006, after another virtuoso display - this time against ​Manchester United - manager Mark Hughes even revealed the admiration of the then-36 year old extended to his side's opposing boss.

He said: "I spoke to Sir Alex after the game last week and he commented on what a good player Tugay is.

"He's an exceptional player and, given his ability, he could play for anyone in the Premiership, or even the world for that matter." Few players have graced the division with quite as much panache as Tugay. Furthermore, few have been able to hit a ball as mindbogglingly hard as the Turk did, even when his age would suggest such an extension of the limbs couldn't be conceivable.

Tugay was a true baller. One of the unappreciated stars of the league. Not by all, though, as his cult hero status at Ewood Park remains firmly intact. As it should be.

In times such as these, l