Sky Sports will be reliving some old Premier League games on their upcoming Monday Night Football show, which is easily going to be worth watching over and over again – and this week they're reliving Leeds United's stunning 4-3 win over Liverpool from November 2000.

Sami Hyypiä opened the scoring for Liverpool after just two minutes by heading home from a free kick, and Christian Ziege made it two in similar fashion 16 minutes later. However, Ziege undid all his hard work by fluffing his lines at the back and giving Mark Viduka a free shot on goal to make the score 2-1 heading into the break. After the interval, it was the Viduka show. The powerful Aussie headed his side level, and he was not deterred when In the buildup to this game, everything was about ​Liverpool. The Reds were tipped to finish ahead of ​Leeds and were even optimistically tipped as potential champions, but David O'Leary knew that his side could compete.

It wasn't easy for Leeds, who could only name four substitutes because of an injury crisis at the club. Losing Jonathan Woodgate to injury early on made it even worse, so to have both the energy and the heart to fight back from 2-0 down early on was testament to the character that O'Leary had given his squad.

This game did actually turn out to be third against fourth, but not how Leeds would have wanted it. Despite coming out on the losing end, Liverpool went on to seal the final ​Champions League spot with a one-point advantage over Leeds.

Goodness me. Rarely have we seen individual dominance quite like Viduka brought us here. From start to finish he was a flat-out bully​, tormenting the Liverpool back line with his power and positioning.

"Every time I had a sniff of goal I scored, but I have actually played better," he ​said of his performance. "These days are very rare, but it was a fantastic win for us."

Even if you ignore his four goals, Viduka's build-up play was superb throughout the game. It was a one-man show for the vast majority of the contest, but the Australian passed the test with flying colours. What on earth happened here?

Coming in on a run of five successive victories, there had even been talk of a potential title run for Gérard Houllier's side. However, they had already failed their first real test - a 2-0 loss to Arsenal - and their strong side were simply not up for the fight against Leeds. To throw away a two-goal lead is nearly inexcusable.

Their season played out as you would expect. Liverpool finished behind both ​Manchester United and ​Arsenal, but they just edged out Leeds for third place. Liverpool ​were overwhelmingly dominant in the first half, and a lot of that was down to During this game, a young Lee Bowyer stood out in midfield for a variety of reasons. He was powerful and technically impressive, but combined it all with a dark side which almost saw him sent off for a two-footed challenge. He was seen as a potential star, but one who risked falling off if his temper got the best of him. It could have gone either way.

Well, Bowyer did enjoy the lengthy top-flight career which fans expected, but that was about as far as his achievements went. He managed one England cap and a League Cup winner's medal, but a £9m move to Liverpool broke down in 2002 because of attitude issues and he ended up being more famous for his fight with Kieron Dyer. Fitting.​ Given this was only a few months into Viduka's Leeds tenure, he risked ruining it all by being so good. For younger fans, you may know this as 'Michu Syndrome'.

Fans thought he was a potential Ballon d'Or winner, and while he didn't make it that far, he didn't fade away and become a one-season wonder like we have seen so often.

As for Liverpool, they did end up having the last laugh that year, and you can't really argue with the fact that the Reds have enjoyed the better fortunes ever since. If you look at Leeds' midfield, you'll see a few names which you might not recognise. The most striking is Jacob Burns, who managed just 11 appearances over his three-year stay at the club and barely built a reputation outside of his native Australia, although he did enjoy a thoroughly average three years with Barnsley.

As for Liverpool, Christian Ziege's time at the club was easily the most forgettable. A knee injury and the impressive form of Jamie Carragher combined to keep him out the squad for most of the year, and he was quickly offloaded to ​Tottenham just one year later. 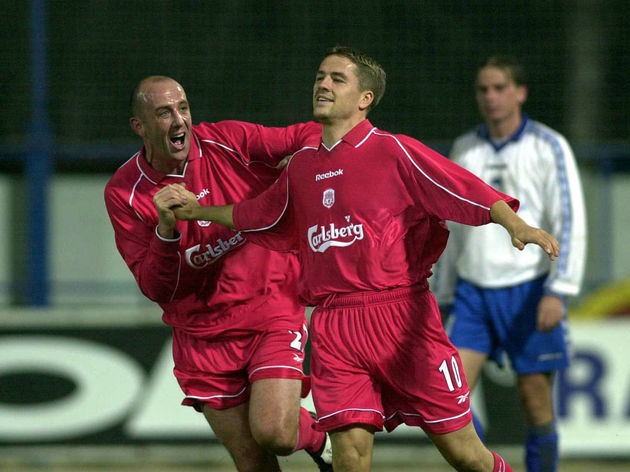 The momentum of this game didn't last long for Leeds. They drew 1-1 with ​Chelsea next time out, and followed that up with a 1-0 loss to ​West Ham.

So, with results like that, it's no surprise that they fell out of the Champions League spots.

Houllier's side were a little wobbly after this game. They beat both United and Arsenal just one month later, but combined those victories with defeats against ​Middlesbrough, Tottenham and ​Newcastle.

Leeds did do the double over the Reds, picking up a 2-1 win in April 2001, but Liverpool still held on to finish third and claim that final European spot.