As we prepare to enter complete lockdown mode in the United Kingdom, it's hard not to wonder when football might ever return to our lives.

Yes, the Premier League, EFL and WSL have announced ​their intention to resume proceedings after April 30, but let's be honest here - the coronavirus outbreak is unlikely to be controlled by then and we're staring down the barrel of months without footy.

So to get the creative juices flowing and to, well, give you something to read, we've got to think outside the box. To do just that, I'm heading into the realms of fantasy - to look at how the ultimate Premier League five-a-side team might shape up.

Oh, and this is also definitive - so no arguing... 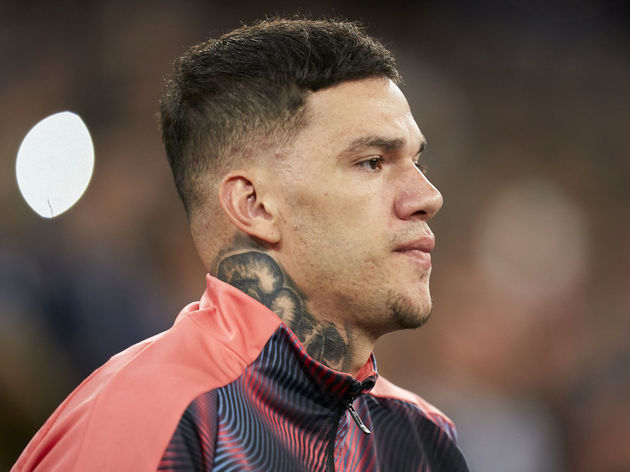 Alright, alright, hear me out before you start losing the plot at Alisson being left out of this side - there is method to this madness.

Remember when ​Manchester City hadn't played Manchester United at Old Trafford and Ederson was still incapable of making mistakes? Yeah, me too - and that's the guy I want in this team.

He's a bloody good shot-stopper, an exceptional reader of the game, is a king penalty taker and has a corking tattoo emblazoned across the entirety of his neck. What more could you want?

There's no disputing who is being plonked in defence. If you want to be the best, you have to pick the best - and in Virgil van Dijk, we've picked the Premier League's - and possibly the world's - very best.

Okay, Watford's Ismaila Sarr may have left the Dutchman swallowing dust recently but this game is played out in a totally different environment. Van Dijk, in a confined space, would be an absolute man mountain, shoving people off the ball at will, breaking up play whenever he felt like it.

He'd also probably get quite fiery, which is not an appealing proposition for opposition players. Next on the five-a-side shopping list is the need for someone with exceptional ball skills. Tidy control, a fantastic first touch, two great pegs and a cannon of a snapshot - all traits possessed by the remarkable ​Kevin De Bruyne.

Liverpool may be winning the Premier League at a canter, but De Bruyne has been the best player in the league this season - sorry, Jordan Henderson - and I can think of no-one better to wind everybody on the opposition team up by holding onto the ball forever.

He'll also swaz a free-kick from anywhere, trust me. Okay, okay, we may have said earlier that pace in a confined space isn't as effective as on a normal sized pitch.

But if you haven't watched Wolves' Adama Traore, where on earth have you been? The man is not only the dictionary definition of grease lightning, he's also got a better physique than The Rock - maybe - and has cracking hair to go with it (see above).

He's also small in stature, ideal for five-a-side, and is one of the most improved players in the world. Get him on the plane. No, no I won't do that - nor will I pick Sergio Aguero, who is probably even more clinical in front of goal (Harry Kane, you're not in either, you'd only hurt yourself).

Instead, we're plumping for the real gem of Liverpool's attacking ​Sadio Mane