Bayern Munich want to extend the contracts of Manuel Neuer, Thomas Alaba, but are looking to offload Jerome Boateng, Javi Martinez and Corentin Tolisso this summer.

Neuer has been ever-present for the Bavarians this season, keeping 15 clean sheets in 37 appearances, while

Boateng, meanwhile, hasn't been playing regularly this season and was the subject of rumours linking him with a move to Arsenal in January.

According to ​​Sport Bild, 33-year-old ​Neuer wants a lengthy extension to his contract, despite the ​imminent arrival of Schalke goalkeeper Alexander Nübel. 30-year-old ​Müller

Alaba, however, is unsure as to whether he will sign a new deal with ​Bayern. He has been deployed as a centre-back for much of the season, with Alphonso Davies occupying Alaba's usual position of left-back.

Bayern are also hopeful wrapping up the permanent signing of on-loan Inter winger Ivan Perisic, for a fee between €15m and €20m. 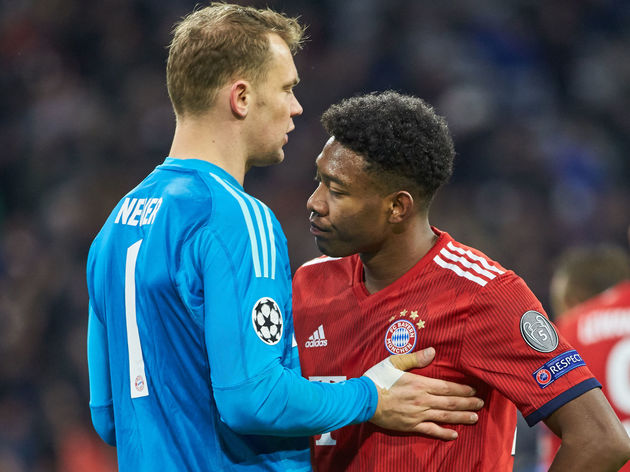 To generate some much needed funds, Bild claim that Bayern are also looking to sell Tolisso and Martinez, in addition to Boateng.

Neither have been permanent fixtures in the side this season, through injuries and lack of form, and may opt to leave the Allianz Arena if it becomes apparent that their first-team chances will be limited.

The Bavarians are currently four points ahead of second-placed ​Borussia Dortmund, and appeared to be in pole position to win an eighth consecutive ​Bundesliga title before the German FA suspended the league due to the coronavirus outbreak.

Bayern had been on a sensational run of form, winning ten out of their last 11 games and going unbeaten throughout the entirety of 2020. ​Champions League​Chelsea