​VII Most Heroic Comebacks in the Champions League Until Manchester United shocked Paris Saint-Germain in the last 16 in 2018/19, no club had ever won a two-legged Champions League knockout tie after losing the first leg by two goals.

United trailed 2-0 on aggregate because of goals from Presnel Kimpembe and Kylian Mbappe at Old Trafford and had a historic mountain to climb with an injury-hit side in Paris.

Two Romelu Lukaku strikes gave them a chance despite conceding, meaning one more would be enough to go through on away goals. That came sensationally late when a VAR review resulted in a stoppage time penalty and Marcus Rashford stepped up and powered home. The 2003/04 Champions League season was a weird one, with giants falling on multiple fronts. Porto saw off Manchester United, Monaco beat Real Madrid, Chelsea, then still only an emerging force, surprisingly knocked out Arsenal.

Deportivo La Coruna, even before mounting a supreme comeback against holders AC Milan in the quarter finals, had already knocked out 2003 finalists Juventus in the last 16 as well.

The Spaniards shouldn’t have had chance against Milan, especially not after losing the first leg 4-1. But the aggregate lead was wiped out by half-time in the second leg at 3-0. That would have been enough on away goals, but Deportivo legend Fran got a fourth for good measure. 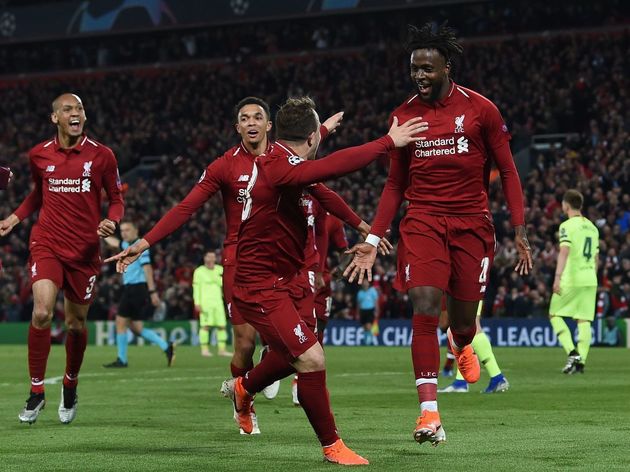 Trent Alexander-Arnold will live off that quickly taken corner until the day he dies.

Liverpool had been comprehensively beaten 3-0 in the first leg in Barcelona in a Lionel Messi masterclass. Few gave the Reds a chance of overturning the deficit, but Divock Origi struck early to give those at Anfield hope of a remarkable turnaround.

Half-time substitute Georginio Wijnaldum netted twice in three second half minutes not long after coming on, before Alexander-Arnold’s quick thinking, combined with Barcelona’s lax concentration, saw Origi get the decisive goal to make it 4-0 and decide the tie. Having seemingly already done the impossible just to get into the semi-finals by beating Manchester City on away goals over two legs, Tottenham pulled of a miraculous comeback against Ajax in the last four to keep their Champions League dream alive even longer.

Spurs lost 1-0 at home in the first leg and were then 2-0 down in Amsterdam at half-time in the return game, giving them just one quarter of the overall tie to turn it round.

Incredibly, they did. Lucas Moura scored twice in quick succession to reduce the aggregate deficit to just one goal, with the Brazilian then completing his hat-trick in the 96th minute to put Spurs 3-2 ahead on the night, level on aggregate, and through to the final on away goals. PSG have notoriously struggled to compete with the very best in the Champions League, so when they thrashed Barcelona 4-0 at Parc des Princes in the round of 16 in 2016/17, it looked as though it might finally have been a watershed moment in Europe.

It wasn’t. It was another early elimination, but in ridiculously dramatic circumstances.

In the second leg, Barcelona were 3-0 up early in the second half to almost close the deficit, only for Edinson Cavani to score an away goal that meant they needed three more. As late as the 88th minute, they were still short, but Neymar then scored twice very quickly at the death before Sergi Roberto got the sixth on the night to complete the unthinkable comeback. Manchester United only needed to claw back one goal for their incredible comeback in the 1999 final; that they scored twice in the space of just three stoppage time minutes at the very end of the game made it so unbelievable.

Bayern Munich had led for virtually the whole final, which wasn’t the highest quality contest in all honesty, and United were missing half of their first choice midfield through suspension.

When Teddy Sheringham scored the equaliser, it was scruffy. Ole Gunnar Solskjaer’s winner wasn't aesthetically pleasing either, but no one in red remotely cared. Even before kick-off, Liverpool vs AC Milan in the 2005 final was a mismatch. By half-time, the Italian giants, the best in Europe at the time, were cruising at 3-0 and bossing the game.

A few years later, Jamie Carragher revealed in an interview that claims Milan could be heard celebrating in the dressing room at half-time were false, and put the unforgettable comeback down to Rafa Benitez’s tactical switch and the lift from hearing, ‘You’ll Never Walk Alone’.