7 of the Best Moments of Roberto Baggio's Career

Roberto Baggio is number 9 in 90min's Top 50 Greatest Footballers of All Time Series.

Roberto Baggio remains one of the all-time football greats and is a hero to anyone who grew up watching Italian football in the early 1990s.

His incredible ability saw him do mindblowing things with the ball in what was the strongest league in the world at the time. What's more, he could have been even better but for injuries.

Here's a look at seven of the best moments from Roberto Baggio's career...

Having started out with Vicenza in Serie C1 aged just 16, Baggio joined Fiorentina in 1985 and got progressively better each year after breaking into La Viola’s first-team on a permanent basis – he was earlier told at 18 he was in danger of never playing again because of a knee injury.

Fiorentina would likely have been relegated in 1989/90 without Baggio’s 17 Serie A goals, while he also inspired the club to the UEFA Cup final, their first European final in nearly 30 years.

Fiorentina lost over two legs against Juventus, but that year Baggio was handed the Bravo Award, similar to today’s Golden Boy, as the best young player in Europe. It had previously been won by Emilio Butrageuno, Marco van Basten and Paolo Maldini, while winners in the years that immediately followed included Robert Prosinecki, Pep Guardiola and Ryan Giggs.

Most Expensive Player in the World

Within weeks of facing Juventus in the 1990 UEFA Cup final, Baggio joined the club in a world record transfer equivalent to around £8m, surpassing the £6m figure AC Milan paid for Ruud Gullit in 1987.

He had not longed turned 23 at the time and there was an immense backlash from riotous Fiorentina fans, who laid siege to the club’s headquarters. President Flavio Pontello even had to take refuge at Stadio Artemio Franchi.

Yet despite the controversy, the transfer underlined Baggio’s world class status and ensured his lasting place in football’s history books.

Baggio finished above Dennis Bergkamp, Eric Cantona, Alen Boksic and Michael Laudrup to win the Ballon d’Or in 1993, becoming the first Italian player since Paolo Rossi in 1982 to do so. He was also named FIFA World Player of the Year ahead of the prolific Romario.

A 25-year-old Baggio had been appointed Juventus captain at the start of the 1992/93 season and he finished it by lifting the UEFA Cup, his first major trophy. He scored 30 goals in all competitions, including two in the two-legged final against Borussia Dortmund. 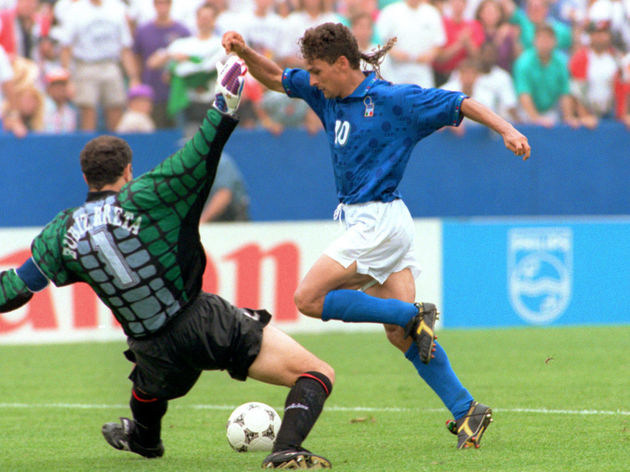 Baggio was firmly among the best in the world when he played for Italy at the second World Cup of his career in 1994, guiding the Azzurri to the final in the United States.

His infamous penalty miss in the final shootout ultimately handed the trophy to Brazil, but the Divine Ponytail had been unstoppable en route to the showdown.

Baggio scored all five of his goals at the tournament in the knockout stages – a brace against Nigeria, a late winner against Spain and another brace against Bulgaria.

Although his season was hampered by injury, Baggio laid his hands on a first Serie A title in 1994/95. Juventus also won the Coppa Italia that season, with Baggio scoring in the semi-final win over Lazio, although he ultimately missed the final against Parma.

Juve also made it back to the UEFA Cup final again, but were beaten to the trophy by Parma.

Having left Juventus for AC Milan in 1995 to make room for the emerging Alessandro del Piero, Baggio later wound up returning to Milan to join Inter in 1998.

Aged 31, the move saw him link up with the club he had supported growing up. revealed

He was past his prime as an Inter player and didn’t win anything with the club, but he remains a fondly remembered figure at the club.

Scoring in a Third World Cup 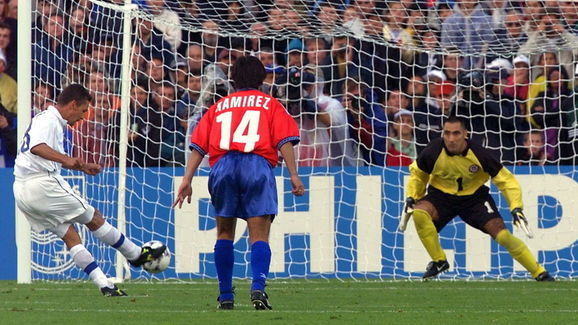 Baggio is the only Italian player in history to have scored in three different World Cup tournaments, setting the record when he netted in a group stage draw against Chile in 1998.

He later went on to score against Austria at the tournament, which was his ninth World Cup goal in total, tying the Italian record held by Paolo Rossi. Only Christian Vieri has since joined them.