What's the first thing that comes to your mind when you think of Roberto Baggio?

'That ponytail/mullet thing he had.'

Ok, that's fair enough - it was a strange combo, but he nearly pulled it off so credit where it's nearly due.

Let me rephrase the question: what's the first footballing moment that comes to your mind when you think of Roberto Baggio?

That's fair enough too because, well, that's pretty much everyone's answer, isn't it?

For the majority of football fans, the abiding memory of Roberto Baggio is the image below. Il Divin Codino wearing the nicest Italy kit ever (no arguments, it is) and the coolest football boots ever (yes they are Diadora boots and no, no arguments over this either), with his hands on his hips, dejectedly looking down at the penalty spot from which he had ballooned the ball over the crossbar to hand Brazil their fourth FIFA World Cup.

For the majority of football fans, that image is all Baggio will ever be.

All Roberto Baggio will ever be is the Italian who 'bottled' the 1994 World Cup final.

And that is exactly why when you spotted that I'd ranked this 'bottler' as the ninth greatest footballer of all time, you were somewhat shocked. You may have sent me a few messages on Twitter saying 'U r An IdOt AnD u No NoFiN aBoUt FoOtBaLL". You may have even sent me a 10 minute voicemail complaining about his placement in the top ten (shoutout to a 90min co-worker).

But the unbridled rage you felt when you realised that Baggio was ranked higher than Cristiano Ronaldo in ​90min's 50 Greatest Footballers of All Time - six places higher at that - isn't really my fault, is it?

In fact, it's actually your fault.

Because what you are doing (along with hanging your head in shame) by remembering that singular image of Baggio as a broken man who had by his own admission "Failed. Period", is misremembering one of the most naturally gifted, most creative, most downright exceptional footballers in the history of mankind.

In many ways, you're making Baggio the reverse Jimmy Glass.

'Who even is Jimmy Glass?' ​more on that here

'Was it a clone? Or a doppelgänger? Is this like a Paul McCartney being replaced by a d The Baggio on show on that particular day, was the Baggio that calcio fans bore witness to for the best past of 25 years - Rose Bowl schism aside, of course.

On that day Baggio was, well, Baggio.

The best footballer of his generation.

The greatest Italian footballer of all time.

Honestly, get a grip.

Against a Hristo Stoichkov-led (more on how good Stoichkov was ​here) Bulgaria side who were fresh off the back of knocking Germany out of the competition, II Divin Codino proved to be what he usually was for Italy...or Juventus...or Fiorentina...or Bologna...or Brescia...less so the Milan clubs but that's by the by...he was a match winner.

In this particular World Cup semi final, he won the match by scoring two outstanding goals. 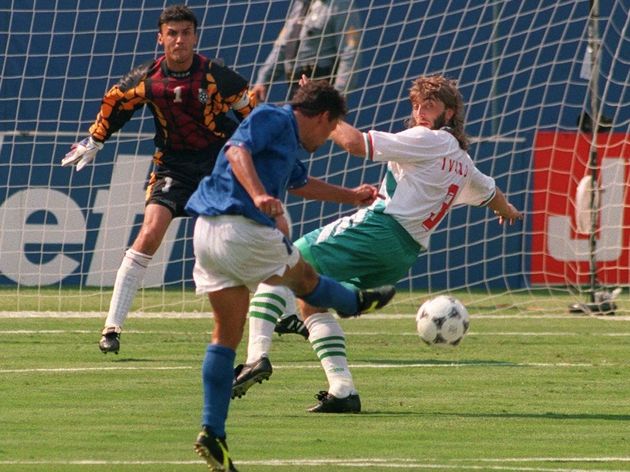 The first of those goals came in the 21st minute when the number 10, standing with his back to Zlatko Yankov closer to the left touchline than the goal line, held off the towering Bulgarian defender and allowed a Roberto Donadoni throw-in to run across his body in-field before quickly evading the tight marking of Yankov to follow it. After bringing the ball under his control, Baggio proceeded to meander along the edge of the box, slipping past Petar Hubchev with the slightest manipulation of the ball, before curling a beautiful side-footed effort past the hapless

It was the perfect exemplification of Baggio's ability to conjure something spectacular from what many footballers would perceive to be absolutely nothing.

If Donadoni thrown the ball to any of the other players -

Four minutes later he was at it again.

This time he spotted space in behind the Bulgarian defence to ruthlessly volley a chipped Demetrio Albertini pass into the left corner of Mikhailov's goal.

'Can I interject here?'

'That game sounds great and all; fair play to him for making the impossible possible or whatever. But it is just one game, so you're doing exactly what everyone else is doing: you're trying to define that bottler Baggio by one game. The only difference is that it's a different game'

But this isn't 'just one game'.

For while that image of a sullen man bemoaning a 'bottling' is an anomaly in Baggio's career, his star-turn against Bulgaria isn't.

Leading his team to victory wasn't an uncommon thing for Il Divin Codino.

He did it throughout that summer in the USA - scoring five of Italy's six knockout round goals.

He did it in 1993 when he scored two goals in Juventus' UEFA Cup final triumph over Borussia Dortmund.

He did it at Bologna in 1997/98 when he scored 22 goals to guide them to European football for first time in a very, very, very long time.

Put simply, throughout his two and half decade career, he did it.

Baggio won countless individual and team honours - including the Ballon d'Or in 1993 - and, bar that one slip up, was consistently one of the best players in the world during that time period.

"When you watch Baggio play, you hear children. Baggio is the impossible made possible, a snowfall from an open door in the sky." Lucio Dalla

For the best part of 25 years, Roberto Baggio conjured extraordinary things on football pitches across the length and breadth of Italy week in, week out. He was a footballer with such creative ingenuity, one who played the game so beautifully, that 'the angels sang in his legs' (

And maybe, just maybe, that's worth remembering too.