We'll leave you to determine which category the scenes in ​Thursday night's Copa Libertadores clash between Gremio and Internacional (which amazingly finished 0-0) fall into.

To help you make a decision, we'll just describe what happened.

A mild mannered affair in the Copa Liberdatores last night between Gremio and Internacional...

The first thing to note is that tensions are always high when these two sides face off. The Porto Alegre derby is always fiery as two of Brazil's big dogs go toe-to-toe, and when they are drawn together in Copa Libertadores - South America's equivalent of the Champions League - it usually goes off.

This one, however, took the biscuit.

It had actually been a fairly dry encounter for the 87 minutes before sh*t hit the fan. With few real chances and just the odd robust challenge to talk about, it certainly wasn't threatening to break any records. Things started to heat up between Gremio's Luciano and Internacional's Edenilson, however - and then this happened.

Some off-the-scale handbags saw both benches spill onto the pitch, as half-hearted punches and feeble kicks darted around left, right, and centre. It looked more like a particularly under-rehearsed Royal Rumble (the WWE version or the ​90min version, your choice) than one of South American football's marquee matches, as even one of the managers climbed into the ring.

It all got a bit much for the referee, it seems. He let it play out, to a point, and then absolutely cleaned house. 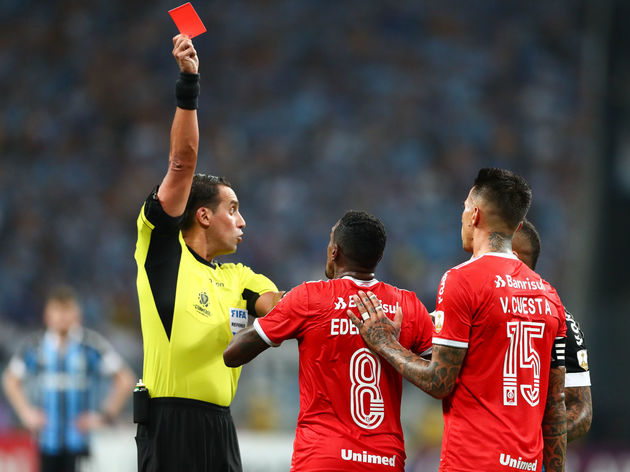 In the end, four players from each team were given their marching orders, two of which were unused substitutes, and the game was allowed to finish 8v8.

It's expected both teams will be hit with reprimands for failing to control their players, and to be fair, you can't really argue with that.