​Goodness gracious me, would you look at that kit.

The Netherlands' 1988 Euros home strip has gained quasi-messianic status among football fashion aficionados and it's not hard to see why.

The trippy, geometric pattern emblazoned on the jersey would look more at home in a modern art exhibition than on a 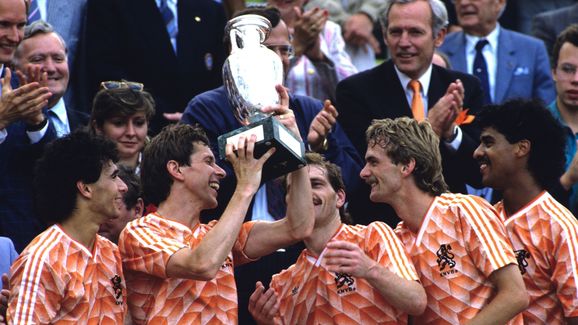 It is not just aesthetics that have elevated this jersey to such legendary status. No, in order for a football shirt's legend to truly cascade down the generations, you better hope that something pretty special was achieved by the team wearing it. Something like, I dunno, winning your country's first ever international tournament. That would probably cut it.

The Netherlands took a strong squad to the 1988 European Championships in West Germany, with the likes of Marco van Basten, Ruud Gullit and Frank Rijkaard - who would all go on lift the European Cup with Milan in 1989 - as well as the Koeman brothers, all into their prime years.

They also boasted the talents of the legendary ​Rinus Michels - the managerial genius behind the all-conquering, Total Football Ajax side of the 1970s, who won three consecutive European Cups.

Drawn in Group 2 alongside USSR, Republic of Ireland and England, Michels' side got off to the worst possible start in their opening game. Falling to a 1-0 defeat to the Soviets meant nothing less than two wins would be enough to secure qualification. Luckily, this Dutch team didn't mess about and defeated both the English and Irish - albeit via a late Wim Kieft goal in the latter instance. The pick of the Flying Dutchman's group games was their comfortable 3-1 victory over the Three Lions. After both Gary Lineker and Glenn Hoddle hit the post in the first half, Marco van Basten made his opponents pay for their wastefulness by netting a wonderful hat trick. All three of his goals showcased a clinical edge that would help him take home the tournament's Golden Boot.

With the group just about successfully negotiated, the Netherlands drew their worst nightmare in the semi finals. Hosts Germany had not lost to their neighbours since 1956 and with a rabid home crowd behind them, they went into the game as favourites.

After Lothar Matthaus opened the scoring from the penalty spot, Michels' troops rallied and equalised through a spot kick of their own, converted by Ronald Koeman. Then, with time running out Jan Wouters managed to slip a through ball into the path on Van Basten and of course, he slotted home with ease to book a meeting with USSR in the final.

On this day, Marco van Basten scored THAT volley in the Euro 1988 final  pic.twitter.com/ULOkF6T5Yx

Despite losing to the Soviets - who were playing in their last ever European Championship - in the group stage, the victory over the Germans had galvanised the team and they started the game in merciless fashion.

After peppering their opponents with shots, the Dutch finally took the lead through a bullet header from Gullit. It was a fine goal but few people talk about it these days. You know why? Because ten minutes after half time his strike partner would do something so outrageous it would burn itself into memory of football fans all over the world.

Receiving a frankly, rubbish cross from Arnold Muhren, Oranje's number 12 back-pedalled until he was almost at the opposition by line. Watching the ball drop onto his right foot, an Basten thumped it back where it came from on the volley and somehow, in a goal that defied all footballing reason and logic, his strike ended up flying into the back of the net.

It was the best goal ever scored in a Euros final. Not only did it secure the Netherlands their first ever major title, it also immortalised their jersey as a timeless symbol of footballing culture.