​Borussia Dortmund have a 2-1 lead to protect when they travel to France to take on Paris Saint-Germain in the second leg of their Champions League round of 16 tie.

The German side warmed up for the trip with a 2-1 win at fellow Bundesliga hopefuls Borussia Mönchengladbach at the weekend and will be confident of securing safe passage to the quarter finals on Wednesday. PSG come into the game with fresher legs, as their Ligue 1 game against Strasbourg was postponed due to concerns over the coronavirus outbreak in France, which has resulted in Wednesday's game being played behind closed doors. A 1-0 win would be enough to send them through, having already scored an away goal.

PSG have a lengthy list of absentees for Wednesday, with their midfield in particular depleted. ​Ander Herrera is a long-term absentee with a thigh problem, while Colin Dagba (knee) is unlikely to be fit.

Thiago Silva (hamstring) is similarly a doubt, as is former Dortmund star Abdou Diallo. Forward Eric Choupo-Moting is also out for the Parisians, while Thomas Meunier and Marco Verratti are both suspended. 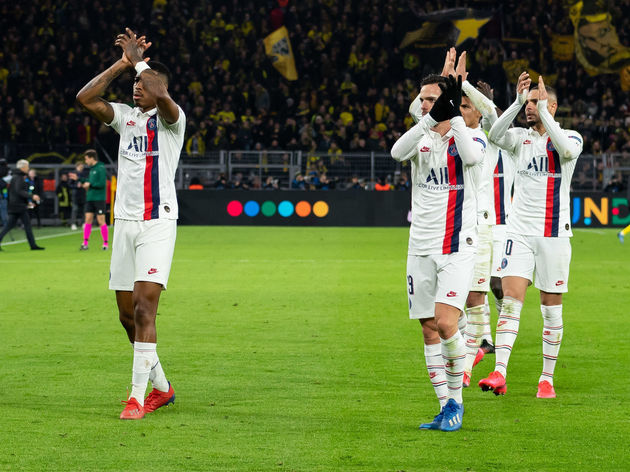 Dortmund have fewer injuries to contend with. Skipper ​Marco Reus will not be available due to a thigh problem, while Thomas Delaney is unlikely to play either, having just recovered from knee issues.

The two teams met earlier in mid-February, when a double from young ​Dortmund striker Erling Haaland proved to be enough for Die Schwarzgelben to win at home. Neymar's away goal has given PSG a lifeline should they score and keep a clean sheet on Wednesday. Previously, the two teams had played out two draws in their only other encounters.

Since the first-leg defeat, PSG have racked up three straight victories, winning 4-3 at home to Bordeaux before easing past Dijon in a 4-0 victory and putting five past Lyon in a 5-1 triumph in the Coupe de France semi-final. Dortmund are on a winning streak of their own, having picked up victories in their last five games.

A 2-0 away win at Werder Bremen was followed by a slender 1-0 victory against Freiburg thanks to Jadon Sancho's winning goal. Most recently, the 2-1 win against Die Fohlen was an impressive result against a tough Bundesliga opponent.

This game will certainly not lack goals as both sides will look to score. PSG will try to ensure Neymar's away goal in Germany gets them through with a clean sheet and a few strikes of their own, while Dortmund will need goals to nullify that away goals rule.

Yet with the PSG defence possibly without Thiago Silva as well as their midfield being hampered by suspension and injury, Dortmund will not be kept out and will win the battle in the centre of the pitch. And while the likes of ​Neymar, ​Cavani and ​Mbappé will certainly have chances to score, Dortmund should have enough to reach the last eight.