How many times have we seen that Ellen White finish? She drifts from the back post toward the front, lets the ball roll across her body and feeds it into the far corner. She lives on the shoulder of the last defender waiting for an opportunity, sniffing around for a chance – and it’s rare that she misses when it comes.

The context made Sunday's strike a little more special. It’s not too dramatic to suggest that this particular goal could be a defining one for the Lionesses, for Phil Neville and for the wider project in the buildup toward Euro 2021. To be a little reductionist and put it in black and white, in a three game format:

It requires a deeper reading of what these two table scenarios actually represent to put this into perspective, though. 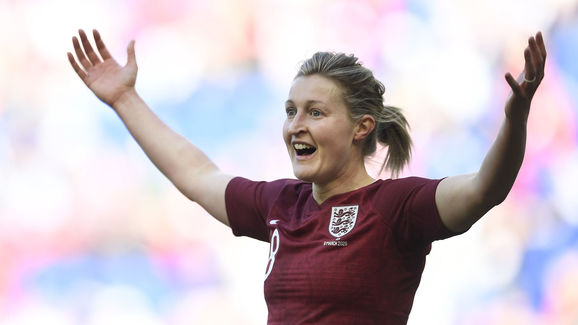 Take, for example, the fact that this England win means youngsters like Chloe Kelly and Lauren Hemp – who were part of a four player attacking midfield in support of Beth England – have now tasted that winning feeling in a big game. That experience in itself is invaluable. They’ve also experienced what it means to be in a group that has tasted defeat (against the USA) and then showed the character to hit back.

They’ve seen a clutch player deliver a clutch moment and will now feel the surge in togetherness that comes from being part of a group that wins. That feeling is addictive, and not one you want to let go.

A 0-0 draw would have meant the team was still hunting for their first goal. Instead, they have a striker who has found the back of the net in a big moment yet again and will have confidence coursing through her veins. The side feels a little more potent, a little more sharp, a little more dangerous going into the final game against Spain – who realistically would have considered themselves a step ahead after their 3-1 win against Japan in their first game.

'I'll have an M & M or something!'  big celebrations ahead for @ellsbells89!

She spoke with @benhainess after her goal was the winner for the @Lionesses - having beaten the offside trap & for once getting the rub of the green with VAR!#Lionesses #SheBelievesCup #JAPENG pic.twitter.com/SyoX2rTO6p

It now makes it easier

However, a clean sheet will invigorate and refresh a defence that held firm against a technical Japan side, who threatened with quick and neat interchanges. Millie Bright in particular will feel like she grew into the game, she was probably England’s best player in the first half, in truth – assured in possession but physical and aggressive in the tackle. Any lapse in concentration from her and the Lionesses could easily have lost the game 1-0.

Brilliant performance at the heart of the defence from @Lionesses @Mdawg1bright today.

Bossed it physically, didn’t give an inch and a clean sheet #JAPENG pic.twitter.com/hh3BODR1SU

The last piece of the puzzle was the formation. Phil Neville was happy with moments against the USA, as his 4-2-3-1/4-3-3 systems gave the likes of Lauren Hemp a chance to go one on one against the American full-backs. He switched to a 4-1-4-1 for Japan, a formation less attacking in terms of the ability to move the ball quickly in when in possession against organised sides.

Neville discussed his frustration at wayward passing and decision making at key moments, but he persisted. When he made a triple change to bring on Williamson, Parris and Duggan, he made like for like changes. When he brought on Staniforth and White, he stuck with his system.

The reward of playing with a 4-1-4-1 against a technical, possession-based side like Japan is that when you win the ball high, as Toni Duggan did late on, you can create 2 on 1 situations in dangerous areas more easily. If the match had finished 0-0, questions would've been asked about whether England were attacking enough to get themselves a victory. At 1-0, the narrative flips – Phil Neville made a tactical decision that paid off.

'It was a brilliant pass from @toniduggan. We always talk about detail. That's the detail that we're looking for. If you win the ball in the final third the final pass has to be right.' @benhainess spoke to @lionesses head coach after a late 1-0 win for England v Japan. #ENGJAP pic.twitter.com/zU7UI87EIv

He stuck with a system that he felt would work, and got a reward from it. A small lapse in concentration for either side looked as though it had the potential to be the difference maker, but this time, that bit of quality from Toni Duggan in her perfectly weighted pass and from Ellen White in her perfectly balanced finish showed how the 1% makes all the difference on the pitch.

Those tiny margins on the pitch generate what will feel like a 99% difference in energy going into the final game against Spain. Those tiny margins, those marginal gains – as ever in football – can and do change everything.