​Steven Gerrard has jumped out of the Liverpool frying pan and into the Glasgow fire. For the first time since joining Rangers almost two years ago, he is beginning to sound like a broken man.

No-one really knows what's going wrong at the club; just that something is going very, very wrong. In three months, they have gone from beating Celtic and looking well-placed for a historic 55th league title, to losing to the SPFL Premiership's bottom side twice in a week and staring down the barrel of another trophy-less season.

Since returning from their winter break in Dubai, which commenced after that momentous win at Celtic, they have won just four of nine matches in the league, having won 17 of 20 prior. They've tasted defeat in just four league games all season but three of those have come since the turn of the year.

Rangers boss Steven Gerrard: “this is the lowest I’ve felt since coming into the job...on Thursday night I was the proudest man in Europe...today for 90 minutes I didn’t recognise anything. I’m feeling pain, I want to win here” pic.twitter.com/S7UJz4Shmr

So, for a young manager in his first job, with the pressure ramping up and the answers not forthcoming, it shouldn't come as a huge surprise that the cracks are beginning to show.

“Where do we start? We have just given three points away, it’s as simple as that," he said after losing to Hamilton Academical during the week, as quoted by the ​Daily Record. "Again, a mistake has cost us. That’s where the three points have gone.

"’I'm not really sure I’ve got that many words to describe it. I laid down the gauntlet before the game and will continue to do that but I have a dressing room that’s shot of confidence.

“We have played ourselves into a rut and I’ve got a real tough, tough job to pick that up and improve it from here. 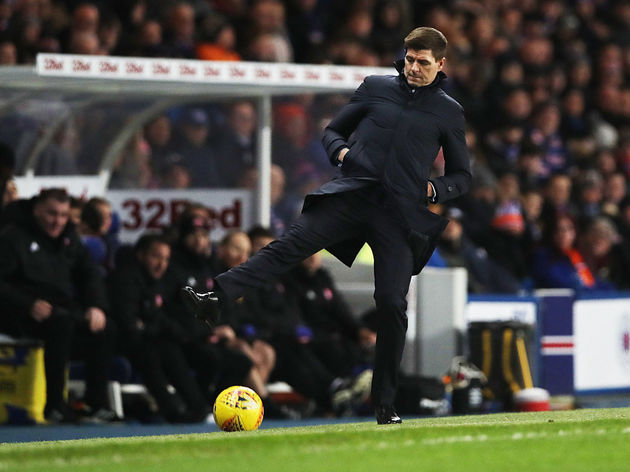 Their season has utterly capitulated, their only saving grace at this stage being a run to the ​Europa League round of 16, though that dream may also end when Bayer Leverkusen come to town.

So just how have things gone from fans acrimoniously warning off ​Liverpool's approaches to calling for his head in the space of three short months? Is it a knee-jerk reaction to a manager who has done a good job over the piece, or was he really just not that good to begin with?

To tell the whole story, you have to take it back to where Rangers were when he arrived; they were absolutely nowhere. The reason he was being linked with Liverpool was the remarkable recovery job undergone in his early days at the club, which looked almost microcosmic of the work Jurgen Klopp has done at Anfield. It was by no means seamless, but like Klopp's Reds, they steadily gained a resilience and a winning mentality that had long been absent from Ibrox. Domestically, they went from the embarrassment of third place to finishing 11 points ahead of their nearest challengers in second; in Europe, they went from crashing out to Progres Niederkorn in qualifying to making the group stages, and had a proper go at advancing further before their hopes were crushed by Valencia and Rapid Vienna.

It was, comfortably, the best Rangers had been since their banishment to the fourth tier in 2012, and they looked set to build on that after an astonishingly impressive start to this season. Their run to the Europa League knockout stages for the first time since 2011, past Feyenoord and Young Boys, signalled further progress, as did the first 20 games of their Premiership season. Until about three months ago, in truth, Gerrard was untouchable, and could do no wrong.

In spite of all that, however, they still had not claimed a trophy. There was a feeling that they still had to win something in Gerrard's second campaign for it to signify a meaningful step forward; but m

The gap to Celtic remains unbridged and the trophy cabinet remains empty, and it's that, coupled with the suddenness and immediacy of their capitulation, that has a large section of fans once again crying for change.

And people still think gerrard is the man to take us forward 臘‍♂️ just because he was a a top player doesn’t make him a good manager. Absolute shambles not had 1 decent performance domestically in 3 months. Time to go!

Despite that, it doesn't seem hugely likely he will be sacked in the foreseeable. The board have bought in, ​signing him up to a new deal until 2024 earlier this season, and unless things go even further awry, he will likely get another summer of recruitment to pull things together.

You shouldn't write off a revival just yet, but it's glaringly obvious things are sinking fast at Ibrox.

As first jobs go, this one is a doozy, and in many ways, you could argue that Gerrard has been a victim of his own early success. There is an immeasurable amount of pressure on the 39-year-old at present, and within six months we'll likely know either way if he can claw it back, or if he is irreparably beyond breaking point. However it plays out, the strides forward the club have taken in his short time in Scotland have demonstrated that he is an impressive coach and a savvy manager in the making. The pressure is getting to him, but the Midas touch is evidently in there somewhere.

Even if he has bitten off more than he can chew in the polarised Glasgow pressure cooker, don't be surprised if that's a speed bump, rather than a road block, in his journey to the top.