Make what you want of it, but it's something

There tends to be no middle ground with the Portuguese boss. Either his players (past or present) adore him for improving them, or make no bones about the manner with which they have been treated.

Sometimes such public criticism can be used as a springboard for development, or it can be the crushing disappointment that sees them hounded out of the starting lineup and eventually fade into the reserves, never to be seen again.

Not sure we even want to ask what's going on here. . .  pic.twitter.com/1rszOBVQWO

How Tanguy Ndombele responds from Mourinho's most recent round of rebuttal remains to be seen, as the ​Tottenham boss held no punches in his scathing review.

“I was expecting players not tired to give more to the team,” the Spurs boss ​said. ​Chelsea​Premier League crown. Integral to that success was Joe Cole, who scored eight league goals as the Blues secured the title with a 95-point haul.

"When he [Cole] scored the goal the game finished for him," he quirked. "After that I needed 11 players for my defensive organisation and I had just 10.” Ricardo Carvalho was a mainstay during Mourinho's first spell at Stamford Bridge, but having been unhappy with not been selected for the opening match of the 2005/06 season, Mourinho responded in typical Mourinho fashion.

He said: "He seems to have problems understanding things, maybe he should have an IQ test, or go to a mental hospital or something.” Everyone remembers Pepe. He was universally disliked for overreacting in every sense of the word, unless you were a ​Real Madrid supporter between 2007-2017 of course, in which case you probably loved him.

Mourinho liked him on occasion, but a certain French defensive prodigy sought to limit his playing time under the coach. That, in itself, is totally justified. Telling the public that in a manner that belittles the player? Perhaps not so much.

“Pepe has a problem. And his name is Raphael Varane," Mourinho willingly revealed. 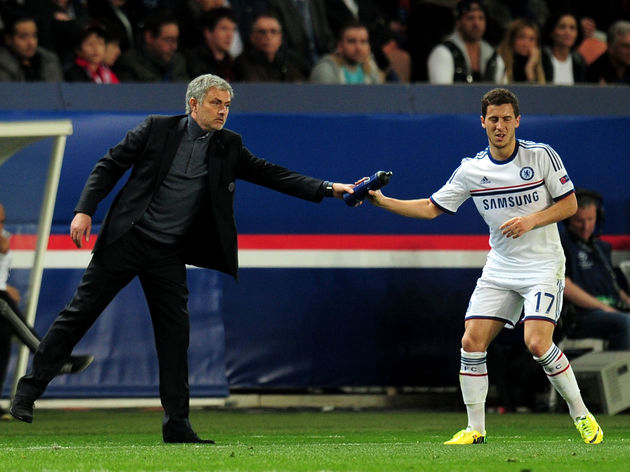 He said: “When the comments come from a player like Eden it’s normal because he’s not the kind of player to sacrifice himself for the team. Normally you get these kind of comments from players like him, from players that can’t resolve a problem like we had in the first goal.

“Eden is the kind of player that is not so mentally ready to look back to his left-back and to leave his life for him.” The Armenian international only showed glimpses of his ability at ​Manchester United since moving from ​Borussia Dortmund the year prior, leaving Mourinho somewhat underwhelmed at his contribution. Instead of opening the door for improvement though, the Portuguese insisted it was only downhill from here.

He said: "I was not happy with his last performances. It's not one or two, I am talking about three, four or five. He started well this season but his performance levels, goalscoring, assists, high pressing, bringing the team with him as number 10, were decreasing step by step."

No point placing a date on this one, it's best just to pick the highlights from a reel that would make Marcelo Bielsa's memorable Leeds press conference seem like a mere 30-second monologue.

One of many criticisms was: "I think he has to change his football brain. I was telling him just now, he was doing things in the second half because he was reacting to my voice. If he was playing on the other side, for sure he would not do it because I was not there to think for him."

Even after leaving his post as United boss, Mourinho continued dishing the dirt on Shaw, proclaiming: “When Maguire gets drawn out to cover for Luke Shaw, and he will learn through the season he will have to do this many times." Oh ​Phil Jones, the gift that keeps on giving. The faces he pulls, the defensive lapses he's become infamous for. All in all, it's a joyful experience watching the centre-back play.

Unless you're Mourinho of course, and you're seeing your side line up for a penalty shootout against Derby County in the Carabao Cup. “I think David performance [against Young Boys] you have to say for 92 minutes, to be David there or myself would be the same," he stated.

We're not safe. Nobody is safe. The link here is clear: some things just don't go together at all.

One such outburst read: "I don't think it's about us getting the best out of him. It's about him giving the best he has to give. I think the World Cup is the perfect habitat for a player like him to give the best. Why? Because it's closed for a month, where he can only think about football. Where he's with his team on the training camp, completely isolated from the external world, where they focus just on football, where the dimensions of the game can only motivate."

​He also supposedly called him a 'virus', stripped him of the vice-captaincy and had a public spat with him during a training session.

It was never going to last.