Everton manager Carlo Ancelotti is interested in signing Newcastle United's Allan Saint-Maximin this summer after sending members of his staff to watch the 22-year-old in midweek.

The Magpies signed the French winger from Nice for £16.2m last summer and he has established himself as a fan favourite on Tyneside, despite demonstrating a lack of consistency in front of goal. While Saint-Maximin has never failed to get the St James' Park faithful off their seats, much of the season has seen him provide flashes of brilliance, rather than prolonged spells of impressive performances.

However, Saint-Maximin's goal in ​Newcastle's 1-0 win over Southampton followed up an eye-catching outing in the FA Cup against West Bromwich Albion.

This display came at an opportune time as, according to ​The Sun, Ancelotti ensured the 22-year-old was watched by members of his coaching team.

The Frenchman's two assists spurred ​Newcastle into a 3-0 lead before the 50-minute mark as the Magpies held on to progress to the FA Cup quarter-finals where they will face Manchester City. ​Everton's pursuit of Saint-Maximin could signal the end of their interest in Crystal Palace's own star winger Wilfried Zaha, who was linked with a move to Merseyside for much of 2019's summer window.

Zaha has three Premier League goals and as many assists to his name this season, which is more than the four goal contributions Saint-Maximin can boast, yet the former Manchester United man has amassed this tally in more than double the minutes the Frenchman has been afforded.

However, Saint-Maximin's debut campaign in England hasn't been plain sailing. He has been Newcastle's most fined player this season and concerns over his future at the club have been raised further after allegedly falling out with manager Steve Bruce - a claim the Magpies boss denies - earlier this month. 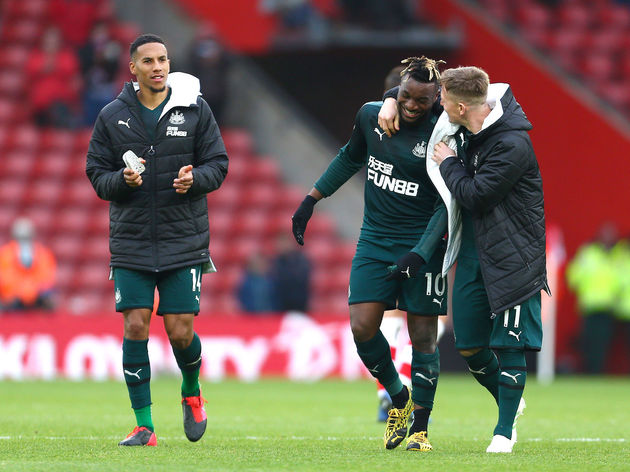 The France Under-21 international may have been difficult off the pitch, but it is the difficulty his pace poses opposition defenders which has piqued the interest of Ancelotti. Should the Toffees secure his signature instead of Zaha's, they will be acquiring the services of a player five years his junior for a fraction of the price.

This promising news off the pitch for Everton just adds to the string of impressive results achieved on the pitch since the arrival of Ancelotti as they entertain ambitions of European football next season.