​Before we get into this divisive, controversial but ultimately, entirely correct combined XI, we would like to make a few very important points.

Now those disclaimers are out of the way, let's reveal 90min's all time Manchester City and Manchester United combined Premier League XI. ​They say you have to be a little bit mad to be a goalkeeper and nowhere does that stereotype fit more aptly than with United legend Peter Schmeichel.

He was pretty handy in goal too, using his previous experience as a handball player to revolutionise the position with his starfish saves. These days, ​Gary Neville has fingers is so many pies is hard to keep track of what the former United stalwart is up to.

His busy body tendencies stretch right back to his playing career with Neville openly admitting that it was hard work, not natural born talent, that allowed him to sustain such a lengthy career at the top level.

This self-depreciation masks what a good player he was though, as 12 Premier League titles, two European Cups and four FA Cups demonstrate. ​One of only three men to captain United to a European Cup win, Rio Ferdinand ushered in a new breed of Premier League centre-back.

Starting life as a midfielder with West Ham, Ferdinand's composure and technical ability allowed him to play out from the back in a way that is now essentially for defenders at the highest level.

His skill set complimented the more brutish approach of Nemanja Vidic, and this partnership would prove to be the lynchpin of one of the club's most successful periods. ​In 2008, a young Belgian defensive midfielder arrived at Manchester City, a club hoping to push on from their mid table finish the previous season.

11 years later he would depart for Anderlecht, having captained the Citizens to four Premier League titles, two FA Cups and four League Cups.

That man was Vincent Kompany and be honest, who wouldn't want to see him line up alongside Ferdinand? ​Before carving out a niche on social media as a living, breathing, meme, Patrice Evra played football for a bit.

Over an eight year stint at Old Trafford the Frenchman experienced many highs, with his signing in 2005 proving vital in securing some of the club's greatest victories. ​Look, we know what you're thinking and you couldn't be more wrong. We did not put Roy Keane in here because we're scared he'd hunt us done if we didn't. The Irishman - not the Scorsese film (editor's note: a bloody great film) - is very much included on merit.

In any team, you need a strong leader - someone who ensures that the high standards that we expect from our players never, ever slip.

There is no one better for this role than Keane, who captained United during their late 90s and early 2000s heyday. ​Kevin de Bruyne's ability to manipulate a football is the closest thing to evidence of sorcery that you'll find on a football pitch. In medieval times he would've been tried as a witch, without question.

The Belgian's assist number are staggering and he could be on his way to securing his first PFA Player of the Year gong at the end of the season, after coming close in previous years. ​A footballing enigma, Paul Scholes' silky technique, Hollywood passes and evasiveness have earned him of a string of high profile fans. If only he could tackle, eh?

The centre midfielder seemed to see things two passes ahead of everyone else and his uncanny ability to control a game was unmatched by his peers.

By the time of his retirement in 2013, Scholes has made over 700 appearances for United and won 11 Premier League titles. Where do you keep that many medals? ​On paper, Wayne Rooney is playing right-wing in our team but we are willing to let him roam wherever he wants.

This level of creative freedom is only afforded to players who truly deserve it and Rooney definitely deserves it. ​From one record scorer to another...this strikeforce is really shaping up nicely.

​Sergio Agu​ero become City's all time top goal getter some time ago now and has shown no signs of slowing down since.

The lowest goal return the Argentine has notched in his eight full Premier League season is 12 with the next lowest being 17. That's pretty ridiculous isn't it? 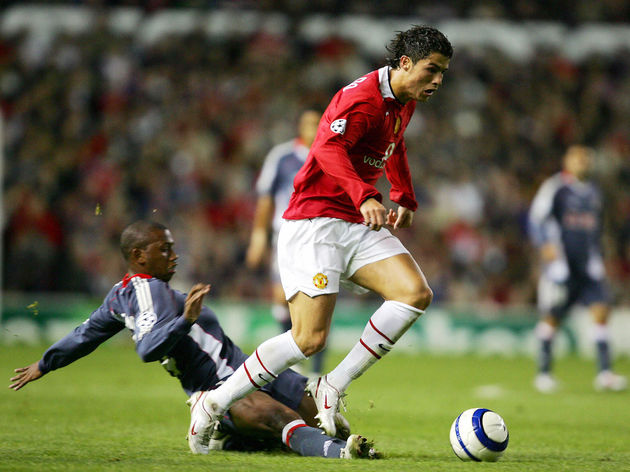 ​Sorry Ryan Giggs, we just couldn't resist the urge to stick CR7 alongside Rooney and Aguero.

During his formative years playing in the Premier League, ​Ronaldo was mainly deployed as a winger - but that did not stop him posting some obscene scoring numbers.

During the 2007/2008 campaign, he netted 31 goals in just 34 appearances and terrified defences with a box of tricks as big as three magicians combined.