​WSL clubs Chelsea and Manchester United are both being linked with an ambitious summer move for revered Wolfsburg and Denmark forward Pernille Harder, with the former even said to already be willing to offer a huge six-figure transfer fee.

Harder has been recognised as one of the best players on the planet for a number of years and her potential switch to the WSL would be a huge moment for women’s club football in England just a matter of months after Chelsea landed another world class superstar in Sam Kerr. The 27-year-old has been with Wolfsburg since January 2017, winning three back-to-back German domestic doubles to date and playing in the 2017 Champions League final.

Harder was named the best female football in the world in The Guardian’s annual list in 2018 and finished second in the inaugural women’s Ballon d’Or behind Ada Hegerberg that same year. She has twice previously been nominated for the BBC Women’s Footballer of the Year award and was also included on the Ballon d’Or shortlist at the end of 2019 as well.

According to German website Sport Buzzer, Harder is ‘at the top of the wish list’ for both Chelsea and United. Fans of the latter have already been tweeting #Harder2020 for some time in the hope that their fledgling club will be able to reach the next level with an elite forward. 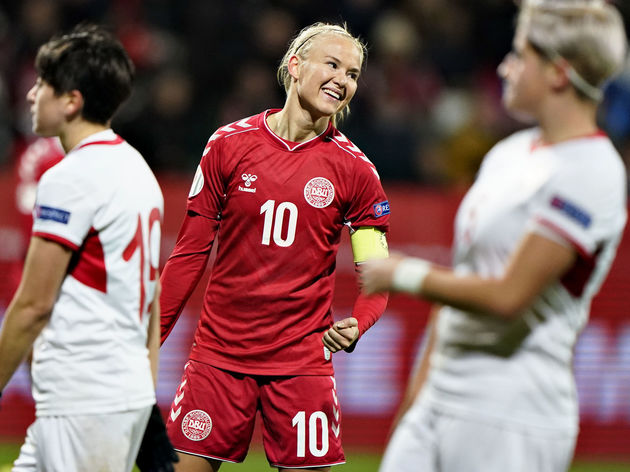 The report claims that Chelsea have already contacted Wolfsburg about a possible deal and made clear their intention to part with €300,000 (£260,000). Transfer fees are still relatively rare in women’s football, especially ones so large, with many clubs tending to operate on short contracts and free signings to better aid budget planning from year to year.

It would be a huge statement of ambition from Chelsea, who have already assembled an elite attacking unit of players, and would further underline their status as one of the best club sides in Europe. The ultimate ambition for anyone is to topple Lyon in the Champions League.

Chelsea hold an obvious lure ahead of United because they will should be able to offer Harder Champions League football next season given that a top two WSL finish looks likely. More so, Harder’s partner Magdalena Eriksson is Chelsea captain and the pair previously played together at Linkopings in Sweden prior to both leaving in 2017. But even if Harder heads to Manchester, where she would be the catalyst instead of the final piece of the puzzle, at least being based in the same country as Eriksson would be something.

It has recently been confirmed that Manchester City striker Pauline Bremer will be joining Wolfsburg in the summer. Whether that has any bearing on Harder’s future there is not yet clear.