Arsenal made the FA Cup quarter-finals for the fifth time in seven years on Monday, as they beat Portsmouth 2-0 at Fratton Park on Monday night.
The first half saw Portsmouth at their liveliest and Arsenal at their most lethargic, the Premier League side being outplayed by the side 37 places below them in the English football pyramid.
However, right on the stroke of half-time, Arsenal went in front through Sokratis Papastathopoulos. Reiss Nelson picked up the ball and sent it back into the box, where Papastathopoulos was there to catch it sweetly and volley it home four minutes into stoppage time at the end of the first half.

The Gunners doubled their lead six minutes into the second half, taking control of the tie at Fratton Park. Nelson whipped the ball into the box again, and as it dropped nicely Eddie Nketiah was there to smash it home from point-blank range. 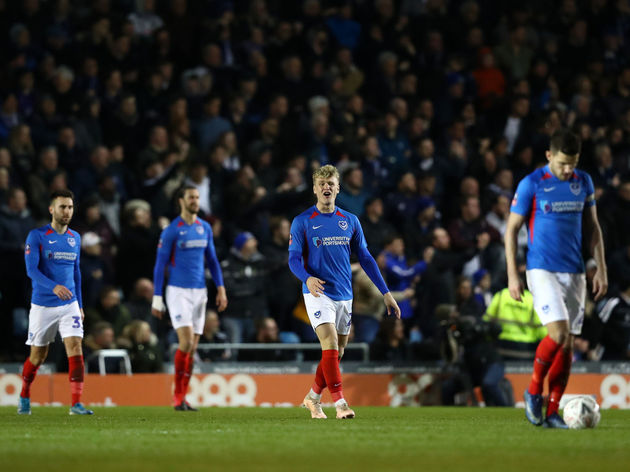 STAR MAN - Any creativity or hope of a goal for Portsmouth came from Ryan Williams on the wing. He created the best chances for Pompey and was involved in every attack, having a meaningful impact on the game despite not helping the hosts get on the scoresheet. Just four days after their embarrassing Europa League exit to Olympiacos, Arsenal had a point to prove on the south coast.

An early injury to Lucas Torreira hampered the Gunners' flow, but that was no excuse for a lacklustre and ineffective first half. Arsenal barely lay a hand on their hosts and were playing with no real urgency, yet they won the battle of focus to take the lead moments before half-time. That goal gave them breathing space, and Nketiah doubled their lead after the break to put the Gunners in cruise control. They were far better in the second half, neutralising Portsmouth with an organised defensive display and full of life going forward with their young vibrant attackers.

Monday's win in the FA Cup was vital for Mikel Arteta's side, who have had a nightmare few days. Arsenal deservedly march on to the quarter-finals with a convincing display, and given their league position and European exit, it remains their only opportunity for success.

Excellent win for Arsenal and a fine way to respond after Thursday. Weren’t great early on, but didn’t do anything stupid and then dominated completely after taking the lead. Nelson and Ceballos excellent, impressive debut from the composed Mari. Three goals in six for Nketiah.

STAR MAN - Reiss Nelson was explosive all night long, and had a key helping hand in both goals. He delivered excellent crosses for both goals and was a threat throughout the entire game, as he helped set up both of Arsenal's goals and caused Pompey problems with his pace and flair.

Reiss Nelson gave us a reminder of just how good he can be tonight. He was showing promising signs upon Arteta’s arrival, and was very unlucky with the timing of injury. He looked really sharp tonight. Hopefully he can kick on between now and May.

5/8 - Reiss Nelson has been directly involved in five goals in his last eight starts in all competitions for Arsenal (2 goals and 3 assists). Catalyst. #FACup #PORARS pic.twitter.com/sNU35Un6Kw

Portsmouth are back in League One action, as they continue their promotion pursuit with a trip to Peterborough on Saturday. Pompey return to Fratton Park on 10 March, when they host promotion chasing Fleetwood Town.

Arsenal have a London derby back at the Emirates, welcoming ​West Ham to north London on Saturday. The Gunners are then back on the south coast the following week, as they travel to ​Brighton on 14 March.