The Everton manager approached Chris Kavanagh after his side’s draw, where the Toffees had a late goal ruled out. Dominic Calvert-Lewin thought he had netted a stoppage-time winner, but it controversially overturned by VAR.

Ancelotti confronted Kavanagh at full-time and was shown a red card for his protests. Following an investigation, the Italian has been charged by the FA, who deemed that his language and behaviour towards the officials was unacceptable.

The Everton boss was given his marching orders at full-time following his reaction to the VAR controversy!  pic.twitter.com/jrKi834GKP

In a statement released by the FA on Monday (via the club), they said: “Carlo Ancelotti has been charged with misconduct for a breach of FA Rule E3.

“It is alleged that the Everton FC manager’s language and/or behaviour on the field of play at the end of the Premier League fixture against Manchester United FC on Sunday 1 March 2020 amounts to improper conduct. 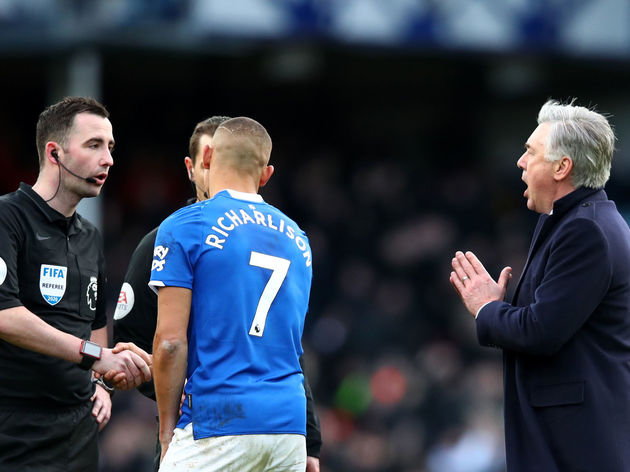 Ancelotti is the first manager to be shown a red card in the Premier League, thanks to a new rule introduced at the start of the season. Managers were previously sent to the stands, but the change implemented by the International Football Association Board allows them to receive equal punishment to players.

Ancelotti has until Thursday to respond to the charge, which comes with a fine. However, the ​​Everton manager does not automatically face a touchline ban, as pointed out by The Times journalist ​Paul Joyce on Twitter.

Everton thought they had snatched all three points right at the death, but were cruelly denied the winner. Calvert-Lewin’s deflected strike was ruled out because Gylfi Sigurdsson – who was lying down on the floor - was deemed to be obstructing David de Gea’s line of sight. Next up on Sunday, Ancelotti is set to return to Chelsea for the first time since 2011, when he was sacked following a trophyless season. Previous to that, the Italian had guided the Blues to a historic double, winning their fourth league title and their sixth FA Cup.

The result sees Everton sit 11th in the table, as they prepare for their trip to the capital to face Ancelotti’s former employers.