​Chelsea are the latest side to be linked with a move for RB Leipzig centre-back Dayot Upamecano, with head coach Frank Lampard ready to overhaul his defence.

The Blues have managed just seven clean sheets all season, and while much of that blame has been directed at goalkeeper Kepa Arrizabalaga, there's no doubting that their defence has not helped. 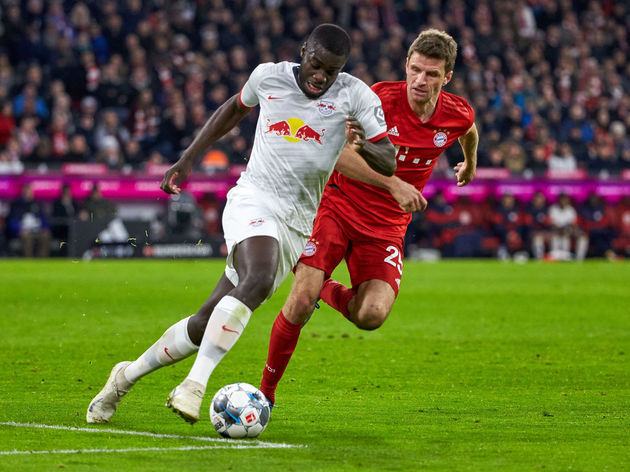 Having seen his side torn apart in Tuesday's 3-0 loss to ​Baye​rn Munich, Lampard is now thought to be ready to make changes as ​The Mirror note he is interested in recruiting Upamecano.

The 21-year-old Frenchman has been linked with a whole host of clubs, including the likes of ​Arsenal, ​Barcelona and Bayern, and he has ​refused to extend his contract in Leipzig, so he has less than 18 months remaining on his current deal.

That appears to have caught Lampard's eye. Interestingly, it is said that the boss wants to pair Upamecano with ​Antonio Rüdiger, who is described as the 'undoubted first choice', despite probably being the most disappointing of all ​Chelsea's current centre-backs this season. To finance a move for Upamecano, the likes of ​Marcos Alonso and Emerson are thought to be nearing the exit door, while Arrizabalaga and ​Willian are both also touted as potential departures.

The Mirror are not the only outlet to discuss a summer exodus at Stamford Bridge, as ​The Sun go as far as to suggest that eight first-team stars could be on their way out.

They suggest that Chelsea are considering parting ways with ​Pedro, Kurt Zouma, ​Ross Barkley and even midfielder Jorginho. Out of all those players, the only departure which would come as a real surprise would be Jorginho. The Italian has been a core part of Lampard's side this season, wearing the captain's arm band when ​César Azpilicueta is off the pitch, so it certainly does not seem as though his future is in doubt.

However, his agent has ​repeatedly flirted with the idea of a return to Italy, so perhaps this one could be out of Lampard's hands.