It's been one of the more startling criticisms of Pep Guardiola's illustrious managerial career.

For all his success in the hotseat, he has been repeatedly accused of 'overthinking' on big European nights. Whether it's a negative approach to away fixtures, a tactical plan that breaks from the norm or

Man City go into the second leg at the Etihad in a very strong position and they have a lot to thank this man for! #RMAMCI pic.twitter.com/XOQs072RNT

While opting to field ​Gabriel Jesus in place of ​Sergio Aguero is a card he's pulled out of his sleeve on occasion before, the decision to do so in one of the most important fixtures of his Manchester City reign naturally coughed up suggestions of the aforementioned narrative.

There is no doubting that both possess their own qualities, though.

Aguero is one of the greatest strikers the Premier League has been fortunate enough to host, meanwhile Jesus is the more mobile of the pair with youth on his side. However, in a tie where away goals can play such an integral part in the overall outcome, deciding to shun the club's all-time record goalscorer for a Brazilian who has yet to reach his unquestionably high potential was a move that raised eyebrows.

The immediate thought was that Guardiola wanted to add dynamism to his side. The second thought was a desire to add defensive resolve and cover in wide areas. Just three minutes into the tie, it looked clear that Guardiola had setup to counter Madrid's strengths, not vice-versa.

Benjamin Mendy offers athleticism down the left flank, but with Madrid on the ball, Jesus was tasked with providing cover for the Frenchman in an unorthodox wing-back slot. 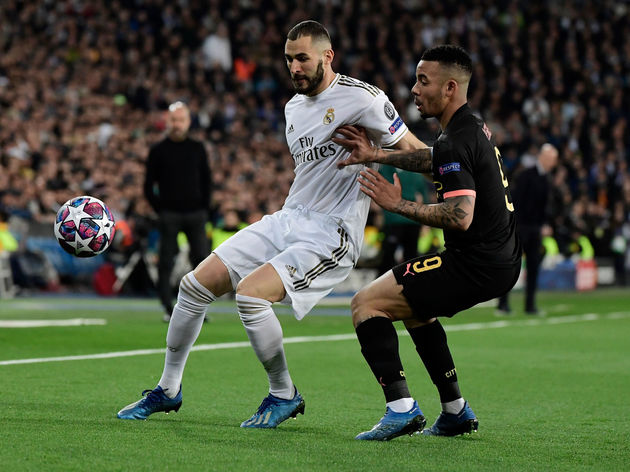 In the early stages, it was job he did superbly. Reading the play well and tracking his runners, he looked confident with the instructions his manager had bestowed upon him.

His energy and endeavour where there for all to see, as he would bombard up the flank whenever there was a break on where he could link up with Kevin De Bruyne in the false nine position.

It was this duo who combined to almost put the visitors in front, the Belgian's ball finding Jesus in the box who cut inside but was unable to direct his strike beyond Thibaut Courtois. It was a difficult finish, but the effort he produced was too close to the goalkeeper when it looked for the world as if he'd score.

One missed chance aside, this was the trend that followed for the rest of the first half. Disciplined, energetic and lively, Jesus was impressive. Would Aguero have done that? You'd think not.

Even as the second half went underway, the lack of movement on the ​Madrid bench meant City could maintain their early excursions and keep the shape and form they utilised in the first half. Once more, Jesus occupied a wide berth, covering Mendy when out of possession but given licence to join the attack when a break looked on.

5 - All five of Gabriel Jesus' Champions League goals this season have been away from home; only Robert Lewandowski (9) and Serge Gnabry (6) have scored more on the road this term. Saviour. #RMAMCI

On the ball, he was positioned in his regular striking role, with both roles he played in seeing him productive and hard-working in equal measures. However, if anything, his defensive duty was his most proficient. It may sound bizarre, but he looked composed and comfortable down the left flank, stunting Isco whenever the question was asked.

Madrid's goal was, on the balance of play, unjust, but that did little to impede Jesus' confidence as he continued to roar forward.

All you could really say at this point for the Brazilian - who'd been truly thrust into the limelight - was that a goal was lacking.

As soon as those words had chance to be uttered, he heeded those calls.

Rising high above ​Sergio Ramos with 12 minutes to play, he was at his most lethal in his natural habitat. Aerial prowess is not his forte, but sheer determination and persistence proved to be the winning formula as he guided a header beyond Courtois to hand his side that crucial away goal.

Guardiola's setup had reaped no rewards til then, but the man he trusted to carry out that plan more than any other had answered his call. He was, based on those criteria, playing perfectly.

Yet, neither the match nor the tie was up and, with City in the ascendancy, they continued to harass the Madrid backline and midfield with Jesus leading the way. A foolish Dani Carvajal mistake handed City their second goal on a plate, but Jesus' quick thinking and boundless energy made Los Blacos' task even fiercer ahead of the return leg.

It was his darting run towards the box and across Ramos that prompted the Spaniard to see red, a detail that could be the deciding factor in whether or not City reach the final eight.

They've got a firm foot in it already, but the talk of the town in the papers tomorrow will centre around Guardiola's masterclass (and the fact City have finally got someone to take penalties).