It’s safe to say that Serge Gnabry is having a fantastic season.

The Bayern Munich winger has been tearing up the Bundesliga and beyond, epitomised by his clinical performance in the Champions League on Tuesday night.

Bayern travelled to London to face Chelsea in the round of 16, and Gnabry stole the show. He scored two excellent goals in just three minutes, all but killing off the tie in a clinical second half performance at Stamford Bridge.

It takes Gnabry’s total tally to 17 goals in all competitions this season, his best ever campaign. On top of that, he has now scored a remarkable six goals in two visits to London, finding the back of the net four times at the Tottenham Hotspur Stadium, and twice in west London.

His haul is even more impressive when you compare his record to those who ply their trade in London, week in and week out - evidenced by this list of players that Gnabry has either matched or outscored... One of the most notable players Gnabry's London tally equals is Nicolas Pepe, ​Arsenal's £72m arrival from Lille. The Ivorian has six goals - which have all come in the capital - in 30 games, with his season tally equivalent to Gnabry’s Champions League record of six in two London games.

Pepe still seems to be finding his feet in north London, with all but one of his goals coming at the Emirates. The Ivorian has one goal and three assists in back-to-back league games, yet Gnabry has managed to equal his London goalscoring record in just 180 minutes of football. It's been a deeply frustrating season for Tottenham midfielder ​Dele Alli, who has just six goals in London this season. His overall season tally isn't much better at eight goals, with one league goal in his last eight appearances.

While Spurs have been able to rely on Harry Kane and Son Heung-min for the goals this season, their injuries will test the quality of Spurs' squad depth. With Alli the next best scorer, he needs to step up to help guide the Lilywhites to a top four finish. While Pierre-Emerick Aubameyang has had a superb season in front of goal, it’s not been so simple for strike partner Alexandre Lacazette. The Frenchman has just six goals in London this season for Arsenal, far less than what Gnabry has managed to contribute the Bundesliga.

An early ankle injury didn’t help Lacazette, though he has hit his stride again at a crucial point of the season. He scored the winner in Arsenal’s 1-0 Europa League win over Olympiacos, and scored his first Premier League goal in two months against Newcastle recently. 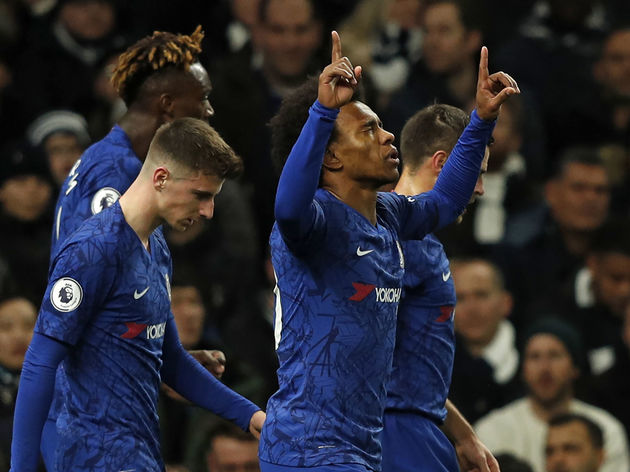 One of ​Chelsea's longest serving players in the current squad, ​Willian has been unable to reach double figures as of yet. The Brazilian has netted three times in London and just once at Stamford Bridge, in the 2-0 win over ​Brighton back in September.

Willian's other two capital goals came in a huge derby win for Frank Lampard's Chelsea, when he scored a brace in the 2-0 defeat of Tottenham. His London treble has come in 19 appearances, a stark comparison to the two games Gnabry needed to double that tally. ​Champions League, a figure that Gnabry has now beaten six times over.

Moura is a versatile attacking player who proved crucial in Spurs’ mesmeric Champions League run last season, but it just hasn’t happened for him since. While he is an important player for the north London club, no league goals in ten appearances isn’t pretty reading for the 27-year-old. Since he arrived from ​Borussia Dortmund in the summer, Christian Pulisic has had a mixed start to life at Chelsea. Despite scoring a fantastic hat-trick at ​Burnley, he has scored just one goal in the capital, back in November during the Blues' 2-0 win over ​Crystal Palace.

Pulisic is a familiar face to Gnabry, after spending three season in the Bundesliga together. Their rivalry intensified when Gnabry made the move to Bayern from Werder Bremen, something that Captain America's move to London soon bought to a premature end.