​Ex-Manchester United forward Henrik Larsson has revealed that he regrets not staying at Old Trafford longer than his 10-week loan in 2007, opting to honour his contract with Helsingborg rather than continue with United until the end of that season.

Despite arriving in Manchester aged 35 and the deal only initially intended to be short, Larsson quickly became a cult hero for fans and the club was keen for him to stay on. But having wanted his son to grow up in his native Sweden and made a promise to Helsingborg that he would return in March in time for the 2007 Swedish season, Larsson went home.

“Playing back home in Sweden, yes it’s professional, but it's not the atmosphere, the aura about it like at United. I felt at home there,” Larsson told Sky Sports of his experience.

After 13 appearances in all competitions, Larsson sat down for talks with Sir Alex Ferguson and club captain Gary Neville about carrying on until the end of the campaign.

“I said I really appreciate it but I can’t [stay],” he explained. “I promised Helsingborg and they invested a lot of money for a small club from Sweden to bring me home. I felt obligated to do what I put pen to paper. I promised them I would come back home. 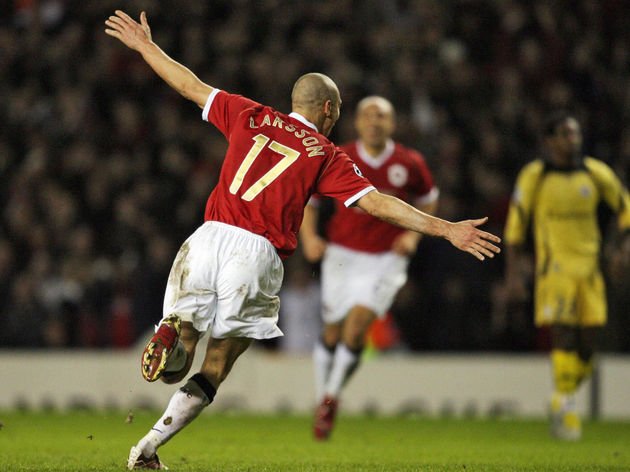 “Even though United is so much bigger I felt that I couldn’t break my promise.”

Looking back, Larsson says it is the ‘only regret’ he has from a playing career that famously took him to Celtic and Barcelona. “I think if I [had stayed on for the rest of the season I would have been offered a little bit more, maybe an extension on that,” he added.

Larsson also revealed that he first had the opportunity to join the club from Celtic several years earlier around 1999 when an unknown United player contacted Celtic defender Marc Rieper. But the Swedish star never felt the need to leave then because he was happy.

“I felt that now is not the time,” he said of that first United approach. “I was earning good money, it was a good contract that I had. To move down south for a few more pounds a week wasn’t interesting for me.”