8 of the Best Moments of Bobby Charlton’s Career

He is a true legend for both Manchester United and England and here’s a look back at eight of the best moments from his career... 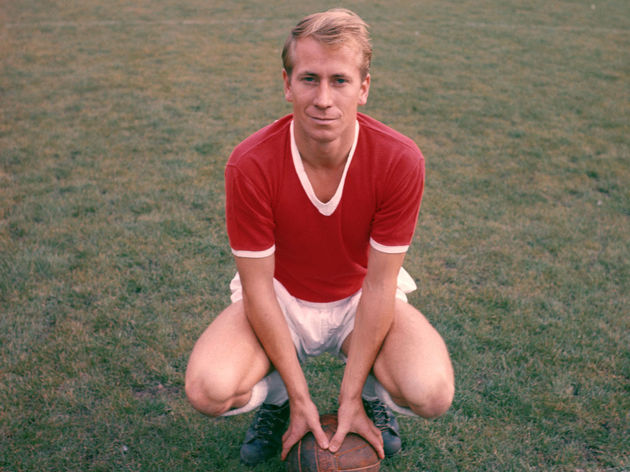 Having been part of three consecutive FA Youth Cup winning teams after joining United as a schoolboy, Charlton was handed his first-team debut in October 1956 in a league game against Charlton – he turned 19 less than a week later.

This was the peak of the Busby Babes era, with the young side capturing the First Division title the season before and going on to retain it as Charlton joined the senior squad. The team also reached the European Cup semi-finals in their first ever season in continental competition.

Charlton played 17 times in all competitions that campaign and scored 12 goals. Charlton was just 21 at the time of the Munich air disaster in 1958. He survived the tragedy that cruelly claimed the lives of eight of his close friends and colleagues, but from it he emerged as a talisman, catalyst and symbol of enduring hope as the club got back to its feet.

Along with Harry Gregg and Bill Foulkes, Charlton was back playing before the end of the 1957/58 season, while he would score 29 goals the following campaign. Despite what he would go on to achieve, that remained the most prolific season of his entire illustrious career. Charlton was part of the first United side to win a trophy after Munich when a developing team featuring the likes of Paddy Crerand, Denis Law and David Herd won the FA Cup in 1963.

It was an important step in the club’s ongoing recovery and represented a key moment for Charlton at the end of a season that had seen him side-lined through injury early on.

Two years later, United were crowned English champions for the first time since 1957. Charlton was not only a success in a Manchester United shirt, he was a crucial figure as England won the 1966 World Cup on home soil, giving an otherwise largely pragmatic Three Lions squad a genuinely world class edge.

Charlton scored England’s first goal of the tournament in a victory against Mexico, while he was at his brilliant best in the semi-final against Portugal when the hosts saw off the strong challenge of an opponent inspired by the prolific Eusebio.

Charlton received the Ballon d’Or in 1966 for his performances and success with England, as well as his continued world class impact with United at club level – to this date, he remains one of only three Englishmen in history to have won the prestigious accolade.

He was voted winner ahead of Eusebio, Franz Beckenbauer, whom he neutralised in the 1966 final at the expense of his own game, and his World Cup winning captain Bobby Moore. Charlton overtook former international colleague Jimmy Greaves as England’s all-time top scorer in May 1968 when he scored his 45th goal in a friendly against Sweden at Wembley.

Greaves finished his England career in 1967 on 44 goals, a tally Charlton matched in a Euro 1968 qualifier and surpassed soon after. He would go on to reach 49 by the time he called time on his own international career after the 1970 World Cup.

That record stood unequalled for 45 long years when Wayne Rooney finally bettered it. 10 years after the tragedy at Munich, United lifted the European Cup in 1968 to at last complete the club’s emergence from the ashes of the disaster.

Charlton was captain that night against Benfica at Wembley and scored twice in United’s 4-1 win, getting the first to open the scoring and later the fourth as his side swept their Portuguese opponents aside in a one-sided period of extra-time.

United became the first English club to win the European Cup, with the victory at last ensuring those who perished in Munich had not done so in vain. Charlton was vying with teammate Denis Law in the late 1960s to break the club’s all-time goalscoring record, then held by Jack Rowley at 211.

Charlton won the race, scoring his 211th United goal against Stoke in November 1969 and breaking the record later that month when he netted the first of a brace against Tottenham.

He stayed ahead of Law, who finished on 237, and eventually extended it to 249 by 1973 when both players left the club. That record remained untouched until Wayne Rooney broke it in 2017, two years after also breaking Charlton’s England record.