​With Zlatan Ibrahimovic no longer playing for Sweden, RB Leipzig attacker Emil Forsberg has stepped into his place to become the national team's main man.

Forsberg was instrumental in Sweden's run to the 2018 World Cup quarter-final, with the player bagging the winner against Switzerland in the round of 16. 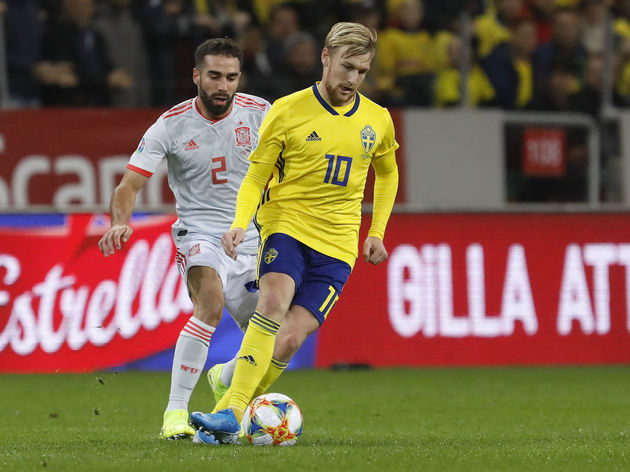 The 28-year-old has also been impressive at club level, having scored five goals and grabbed two assists in 16 games for his club this season, all without being a regular starter.

He will be crucial to Sweden's chances of going on a run in Euro 2020, so let's take a closer look at their main man. Forsberg started his career at his local home-town team GIF Sundsvall, and was hugely impressive.

By the second season he was a regular in the side, and was a real threat with his direct running and creativity from the left hand side. In his third season he scored 11 goals in 27 games as Sundsvall were promoted. However, the following season they were relegated and he moved to Malmo FF.

His time at Malmo was a major success, as he played a huge part in qualification for the Champions League group stage. As a result, Leipzig snapped him up and in his first full season at the club, he was the star man as the side won promotion to the Bundesliga. He continued to thrive at the club ever since, becoming one of the key components of Leipzig's title chasing squad. Forsberg won the domestic double two years in a row when at Malmo, and was acknowledged as the best midfielder in the league in 2014.

He also made an instant impact at Leipzig, and within his first full season he was awarded with the player of the season award as they were promoted to the Bundesliga.

He settled into life incredibly well in the top tier of German football the following season, and on a personal level, the 2016/17 season was a phenomenal one. After registering a whopping 22 assists in the league, he was crowned the leading assist maker in the whole of Europe, and was also put in the Bundesliga team of the season.

He has also been recognised by his Swedish counterparts, winning the Swedish midfielder of the year award in three of the last four season. Numbers wise, Forsberg didn't have the most prolific qualifying campaign. He scored just one goal and registered two assists, but that shouldn't take away from the fact of just how crucial he was as he usually made things tick creatively for Sweden.

Sweden qualified out of their group impressively, coming second behind Spain - the only team to beat them in qualifying.

They finished four points ahead of nearest rivals Norway, and will now be hoping that they have the quality to get out of a Euro 2020 group consisting of Poland and Spain...again.