Lacazette’s 81st-minute strike was the only goal of the game in Greece, while it was only his second in all competitions since the middle of December in what has been a lean season. 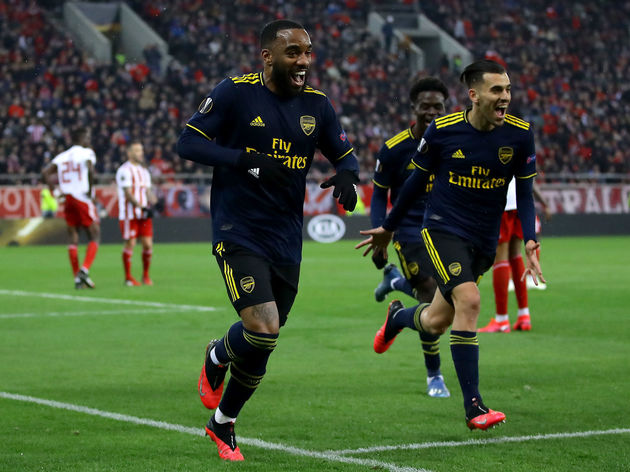 “That confidence and support came from me, but most importantly it came from his team-mates,” Arteta explained to Arsenal.com after the final whistle.

“The way they reacted when he scored, that was a lift. That’s not just a coincidence. It’s something that happens because the energy of the team is putting energy into him as well.”

Arsenal hold the advantage ahead of the second leg in north London next Thursday, although it wasn’t a perfect night for the Gunners and there is plenty of room to improve.

“Defensively we made one or two mistakes positionally that could cost us in difficult situations, and then with the ball we gave a lot of simple balls away,” Arteta explained.

“We had situations where it was open, the next part was open, we could run and then it would be with our opponent. That’s something we have to improve on as well.”

But a major positive from the game was a ninth assist of the season from 18-year-old starlet Bukayo Saka, who continues to seriously impress Arteta with his attitude and maturity. “He’s still as keen to meet with my assistant, willing to improve. He’s a great kid and he makes big decisions in the final third. He’s not someone who hides. He’s got the vision and the ability to execute when the spaces are really tight. That’s a gift.”