Borussia Dortmund is a club steeped in history, with some of Germany's - and indeed the world's - greatest players gracing their famous turf over the years.

Reus did just that, scoring on his ​Champions League debut against Manchester City, the first of four goals in that campaign which helped Dortmund reach the final, sinking Real Madrid on the way.

Famous for his relentless hard work and versatility, Reus has found the net approximately every other game in the eight years since his arrival. Signing from Inter Milan at the midpoint of the 1992/93 season, Sammer made an instant impact at Dortmund, scoring ten goals before dropping back to a sweeper role and becoming a mainstay of the BVB defence.

Sammer holds the honour of being the only Dortmund captain ever to have lifted the Champions League trophy, which was earned in 1997.

He later managed Dortmund to a further Bundesliga victory in 2002. Zorc is a one club man who holds the record for the most appearances for Dortmund, playing 572 times over 17 years of service as a player.

In seven separate seasons he scored more than ten goals, and he accrued enough goals to put him second in the rankings of top Dortmund goalscorers of all time.

During retirement he has held the position of sporting director at the club, overseeing three ​Bundesliga titles. Lars Ricken grew up in Dortmund and, in 1994, became the youngest player ever to appear for the club at 17 years, seven months and 27 days.

The loyal yellow broke another record when he scored the third and final goal in the game which led to BVB winning their first and only Champions League title to date. He found the back of the net just 16 seconds after replacing Stephane Chapuisat, lobbing the keeper from 25 yards; no substitute has ever scored more quickly after coming on in a Champions League final. 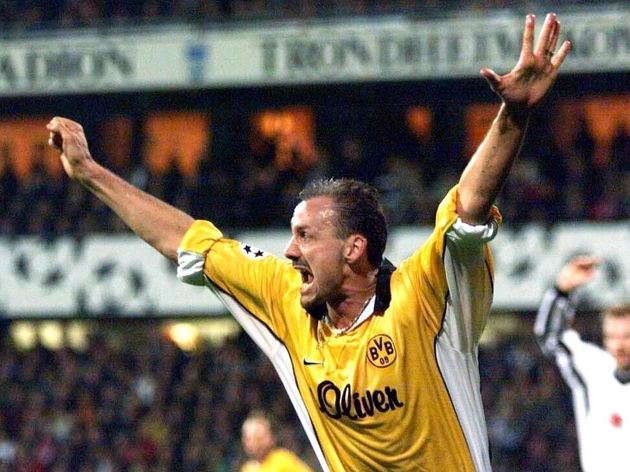 Cool, composed and perceptive in defence, and armed with a lethal header, Kohler was one of the best German centre-backs of his time.

Having arrived at Dortmund in the autumn of his career, Kohler played seven years in a yellow jersey, winning three Bundesliga titles in his time.

The last game of his career was marred by his earning a straight red, taking Dortmund down to ten men and resulting in a penalty which helped Feyenoord defeat die Schwarzgelben to deny them the 2002 UEFA Cup trophy. A winger - nicknamed ‘Turbo’ for his incredible speed - Reuter made 307 appearances during his 12 years at the club, scoring 12 goals and setting up 17 others.

helped die Schwarzgleben lift the Championship trophy for the first time in 1956, a feat for which 250,000 fans reportedly lined the streets of Dortmund when the squad returned to the city. He was part of a famous attacking trio with Alfred Kebassa and Alfred Niepieklo affectionately named ‘The Alfredos’, who helped BVB retain the trophy in 1957.

A legend to this day, the drive of the BVB training ground is named after him - ‘Adi- Controversially, Hummels has been to and from rivals Bayern Munich since beginning his youth career there aged six. Having been defeated by Die Roten in the 2013 Champions League final, he joined them once more, before returning to BVB for £33m in 2018. No goalkeeper has stood between the sticks for Dortmund more often than Roman Weidenfeller. He is one of the longest-serving players in BVB history and, with an average of one clean sheet in every three games, he will be remembered for helping Dortmund win six major domestic trophies.

When he retired he played for ‘Roman and Friends’ in a special testimonial match, only the eighth of its kind in BVB history.