Chelsea striker Michy Batshuayi had an evening to forget on Monday - for numerous reasons.

During the defeat to Manchester United, the Belgian missed a host of clear-cut chances, but to make matters worse, he was also on the receiving end of a boot to the place where he was always going to feel it, especially on a bitterly cold night. Yes, there.

During the first half of the clash at Stamford Bridge, United captain Harry Maguire and Batshuayi competed for the ball, with the former ending up on the floor next to the dugouts. However, as Maguire fell off the side of the pitch, he appeared to kick out at the Belgian. 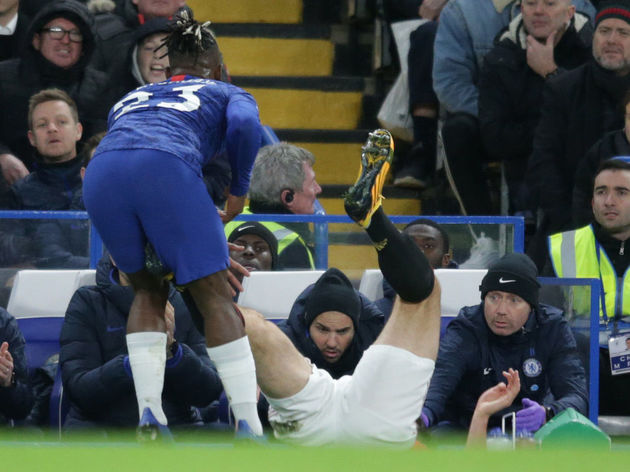 Of course, this did not go down well with the Blues bench but, more specifically, for Batshuayi himself, who had gone down in pain, holding his, well, you know where.

Although there was a VAR review, Maguire escaped punishment - presumably because he, y'know, played the balls...

​Man Utd's number five has now attempted to explain why he reacted in the way he did during his tussle with Batshuayi, revealing that it was merely a natural reaction. Reflexes are certainly natural, but kicking someone in the forbidden region? Really?! Especially after he's just missed three one-on-ones?! Nonetheless, a strong attempt to justify himself.

After the game, he told ​Sky Sports:

"It wasn't a kick-out, there was no intent...it was just my natural reaction to straighten my leg, and if he was going to fall on me, to hold him up. "I knew I did catch him, I knew at the time, but I thought it was the right decision in the end. It was definitely [worrying] during the review, but I never meant to hurt or kick him...Obviously I've got studs on the end of my boots so it probably makes it look worse."

​Maguire further admitted that he apologised to his opponent, but in the end, he was pleased with the decision.

He added: "I apologised to him, but it was nice that the referee had seen sense."

The Red Devils opened the scoring just before half time through Anthony Martial and although the hosts thought they had equalised after the break, the goal was later ruled out for a foul on Brandon Williams. To make matters worse for ​Chelsea, Maguire powerfully headed home on 66 minutes to double their lead. Once again, the Blues thought they had scored, but this time Olivier Giroud was offside. ​Despite the controversy, it was a hugely important three points for Ole Gunnar Solskjaer's men.

It's a result that will hurt for Chelsea fans, but as for Batshuayi, well, it may sting for a little longer.