​Borussia Dortmund scored three in a second-half blitz to ease past Eintracht Frankfurt 4-0 at Signal Iduna Park on Friday night, moving up to second in the Bundesliga.

After a bright start from the hosts saw Raphael Guerreiro strike his free-kick against the post, Eintracht started to settle and began to frustrate Lucien Favre's side.

The visitors were superb out of possession for much of the first half; often pressing BVB high while also remaining compact to ensure Jadon Sancho and Thorgan Hazard had limited space between the lines. 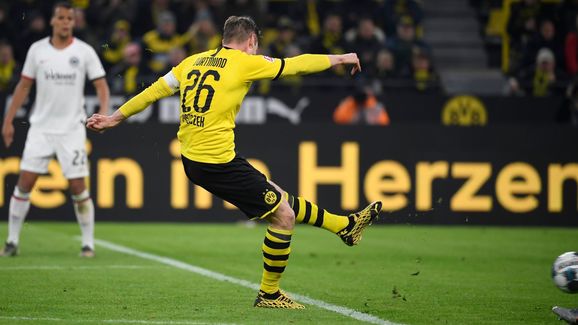 Dortmund did eventually break the deadlock, however, as 34-year-old Lukasz Piszczek scored just his second goal in over two years - coolly finishing with his weaker left-foot from just outside the area after being found by Achraf Hakimi.

Favre's side continued to threaten for the remainder of the half, as Hakimi went close after a typical electric counter-attack by the home side set the Moroccan on his way down the right.

Dortmund then swiftly took advantage of a more enterprising Eintracht side at the start of the second half, extending their lead to 3-0 within ten minutes of the restart as Sancho and Erling Haaland finished off two deadly counter-attacks by the home side.

The hosts continued to shut out a rather tame Eintracht attack before going on to make it four through wing-back Guerreiro, who venomously drove his left-footed effort from distance across Kevin Trapp and into the bottom corner.

Both sides seemed to go through the motions in the closing stages as Dortmund settled for four, climbing to within a point of Bayern at the top of the Bundesliga table.

Just as the pressure was starting to mount of Favre, BVB's potent attacking force somewhat released the tension with a fantastic display in the second period. 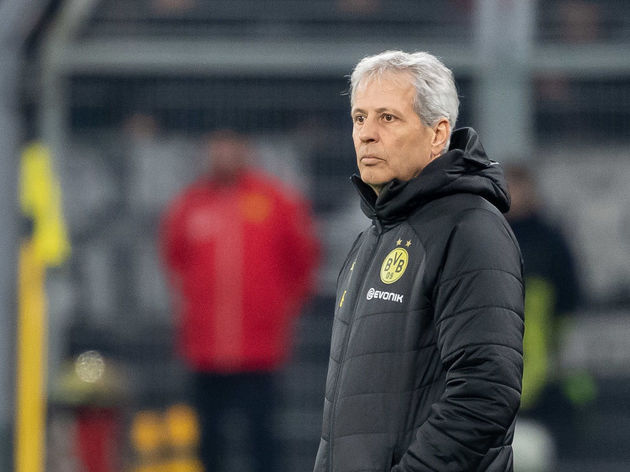 After a disciplined Frankfurt side had stifled the hosts in the first period, Dortmund pounced upon a rather naive performance by the visitors after the restart as they left themselves exposed to one of the deadliest counter-attacking sides on the continent.

BVB were able to turn defence into attack with frightening ease as Die Adler continued to pile men forward - with coach Adi Hutter's decision to switch to a 4-4-2 the start of his side's demise.

But there's no doubt that Favre will be most pleased with a clean sheet after conceding seven in their last two. Although Dortmund's back three will be facing up against a completely different beast on Tuesday night when PSG come to town, Friday night's defensive display was promising nonetheless.

A player who's thrived since Favre's switch to a 3-4-3, Portugal international Raphael Guerreiro was simply electric on Friday night.

Guerreiro is something else man

I'm so happy he extended his contract #BVBSGE

When people talk about individual players at BVB, Guerreiro almost never comes up. He is a bit of a forgotten man, although one of the performers of the season so far.

While the aggressive nature of Frankfurt right-back Almamy Toure meant he didn't have it all his own way early on, Guerreiro gradually grew into the game and quickly started to wreak havoc down the left flank.

His immense ability to play in tight spaces was on full display in this one, as his tidy footwork in his own half helped kickstart a rapid counter that led to Dortmund's third of the night. The wing-back also played a role in BVB's opener, delivering the ball for Hakimi who'd go on to set up Piszczek.

Oh, and if that wasn't enough, he only went and bagged his side's fourth with a fierce drive across Trapp after intercepting Toure's clearance high up the pitch.

Another majestic display by a player who's seemingly gone under the radar this season.