Barcelona Under Pressure to Re-Sign Neymar to Appease Lionel Messi

Talk of Neymar returning reached a peak last summer, only to fail. Player exchange proposals were made, but PSG never budged. The Barça players offered weren’t keen and the club ultimately didn’t have the drive to up their interest and really make it happen. 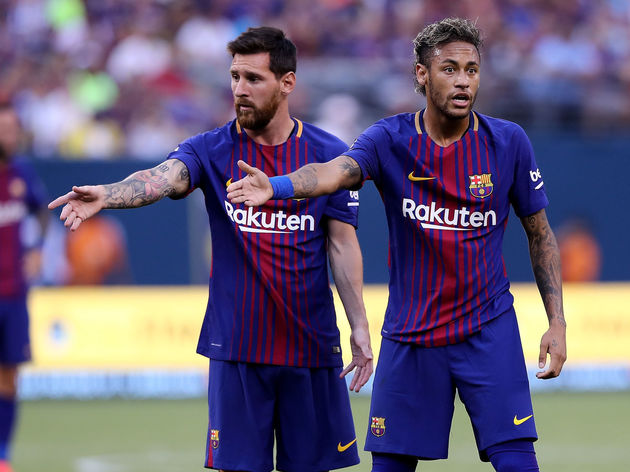 Neymar himself was rumoured to have reacted angrily and emotionally when he finally found out the move wasn’t going to materialise last summer. There was even a rumour at the time that Barça, knowing the finances were almost certainly beyond them, only went through the motions.

The attempted pursuit last summer was said to be for the benefit of Messi, but now they have to take it more seriously and El Confidencial writes that president Josep Maria Bartomeu is under pressure to try and bring Neymar back to Camp Nou.

It is said that Messi’s ‘request’ has to be taken seriously by the club for the main reason that antagonising the six-time Ballon d’Or winner could push him towards the door.

The significant level of influence Messi has at Camp Nou when it comes to sporting decisions is summed up by this line from the report: ‘Bartomeu's Barcelona has reached a point where it is clear that it is more convenient to pay more attention to Messi than, for example, to Eric Abidal.’ If Barça again fail to re-sign Neymar, it threatens to disappoint an already frustrated Messi - who, famously, has a clause in his contract that allows him to walk away from the club at the end of any given season.

El Confidencial notes that even though Neymar wouldn’t necessarily be approved by the majority of Barcelona fans as a result of the manner of his 2017 departure, it would ‘enthuse’ Messi, who is said to ‘need’ the Brazilian more than any other player – even Antoine Griezmann.

From Bartomeu’s own perspective, being able to land a deal for Neymar would be seen as a major win for his presidency, which has come under increasing scrutiny.

But the finances remain a sticking point for Barcelona, while negotiating a sale with PSG has proven impossible so far, despite Neymar’s apparent keenness to leave Parc des Princes.