Keira Walsh's Decision to Stay at Manchester City Is a Big, Big Win for the Citizens

The 22-year-old has spent the last six years with the Citizens, where she has become a vital part of their squad – maturing into a world-class player at one of the WSL’s most successful clubs.

However, it looked as though her time in Manchester may finally be coming to an end when she decided to hand in a transfer request last summer – with the midfielder setting her sights beyond England’s top tier. Thanks to her time in the World Cup last year, playing a total of five games in the competition, Walsh became a well-deserved target for top clubs across Europe (with both Lyon and Atletico Madrid keen to snap up the youngster).

From a little girl in the park, all the way to cup finals and winning trophies with this club.

Here’s to many more successful years in blue  pic.twitter.com/tlWaMqIi9H

That change of heart appears to have had a few factors – apart from the obvious fact that City were eager to keep hold of her, having reportedly rejected bids from both Lyon and Atletico – Walsh is clearly willing to commit to the club to continue improving her game.

At just 22 years old, the English international still has a long way to go until she reaches the prime of her career – and at the rate she is currently progressing, there’s no doubt that she will continue to attract interest over the next few years.

Walsh has earned 22 appearances in all competitions this season, playing an integral part to City’s success. Often played as a deep-lying midfielder, she is great at closing down players and winning back possession for her side. As well as developing an impressive defensive skillset, she also moves the play into the final third and helps create chances for her teammates – conjuring five league assists already this campaign.

She joined the club at the tender age of 17 back in 2014, when she swiftly became a regular starter for the first team – gaining her senior debut against Notts County that same year. She played an important role in City’s Continental Cup win that season too, playing in a 1-0 win over Arsenal in the final. 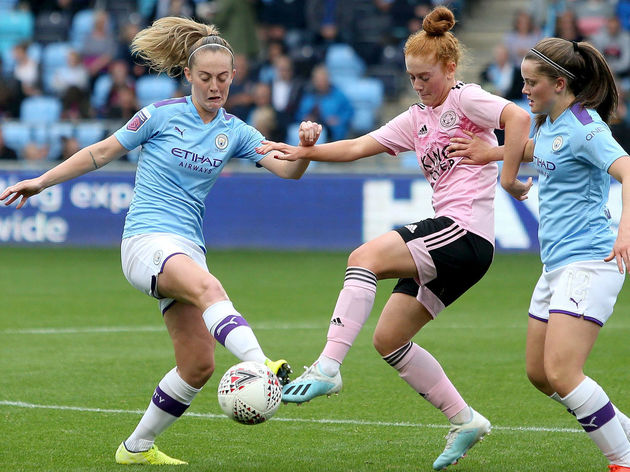 Walsh has made no effort to hide her devotion to the club, having grown up in Manchester and supporting the team from a young age, but looking past her commitment and the crucial role she occupies in the side, experiences from other players may have also swayed her decision.

Take Izzy Christiansen for example, the 28-year-old spent four years with the Citizens before deciding to move to France and join Lyon. The English international started off well, before breaking her leg in the SheBelieves Cup – and she has since admitted that she believes that huge pressure to perform played a part in her injury.

When she recovered, she failed to earn regular first team football at the French outlet – and as a result, returned to the WSL to join ​Everton this season. ​Manchester City are also yet to confirm their long-term replacement for Nick Cushing after he parted ways with the club this month, with interim boss Alan Mahon currently taking the reins. However, it’s almost certain he won’t take on the role permanently - and Walsh’s decision to stay with the Citizens could mean the squad have an idea about their next boss.

Walsh may well leave the club in a few seasons – but for now, she’s willing to dedicate herself to her beloved club – and City fans should be utterly relieved.