Milan vs Juventus Preview: How to Watch on TV, Live Stream, Kick Off Time & Team News

Milan host Juventus in the first leg of the Coppa Italia semi-finals on Thursday evening with the two sides going into the tie off the back of bitter defeats at the weekend.

Stefano Piolo's side squandered a 2-0 lead against city rivals Inter as the Nerazzurri fought back to win the derby 4-2 on Sunday. This sent Inter to the top of Serie A after Maurizio Sarri's men lost 2-1 at Hellas Verona on Saturday. Both sides need to bounce back following their respective setbacks on the weekend and victory in a cup semi-final is likely to provide some much-needed respite from the scrutiny each manager has been subjected to in recent weeks.

​Milan go into the Coppa Italia clash with a mercifully short injury list after Lucas Biglia returned to the bench against Inter - he spent the last seven games in the treatment room. Summer signing Rade Krunic and Léo Duarte are I Rossoneri's only confirmed absentees.

Juventus cannot point towards the same luck when it comes to injuries. Saturday's defeat to Verona was compounded with the loss of Douglas Costa, who picked up a muscle injury during the contest which is set to rule him out for three weeks. The Brazilian winger's absence will have a huge impact on the side, as Costa had started three of Juve's last four games since Sarri began to favour a system which exploited the 29-year-old's pace and trickery, giving the team some much needed width.

In the absence of Costa, ​Paulo Dybala will most likely slot into that front-line, taking up a role behind Gonzalo Higuaín and Cristiano Ronaldo rather than hugging the touchline on the right.

Since the turn of the year, Juventus have lost Merih Demiral, Danilo and Federico Bernardeschi to injuries. However, long-term absentees Giorgio Chiellini and Sami Khedira have made great strides in their recovery, and while they'll miss Thursday's match, a return to action could come next month.

These two giants of Italian football have faced each other 230 times. ​Juventus enjoy the superior overall record with 91 victories compared to Milan's 66, with 73 ending in a stalemate.

Juventus have also fared better over recent meetings with I Rossoneri, winning all but one of their last 18 matches against ​Milan across the league and cup. In fact, these two sides have played out the final of the Coppa Italia in two of the last four editions, with Juventus winning both.

While the records show that Juve won the league game between the two sides earlier this season 1-0, it was one of their poorest displays since Sarri's arrival. Ronaldo made way for Dybala in the 55th minute, storming off the pitch and leaving the stadium before the match had finished.

His Argentine replacement made the difference in a game lacking in clear cut chances before Dybala jinked past the Milan back line and fired home the only goal of the match.

Milan will be looking for a repeat of their intensity that day back in November if not the result. Yet, given ​Ronaldo comes into the match on the back of a record-breaking scoring streak, it's unlikely Milan will have the same fortune of facing a misfiring number seven for less than an hour.

Prior to Sunday's demoralising derby defeat, Milan were yet to suffer a loss in 2020. This improved form has coincided with the hot streak of Croatian striker Ante Rebić.

The summer recruit from the Bundesliga has four goals in his last five games, and opened the scoring against Inter as Milan raced into a 2-0 lead. 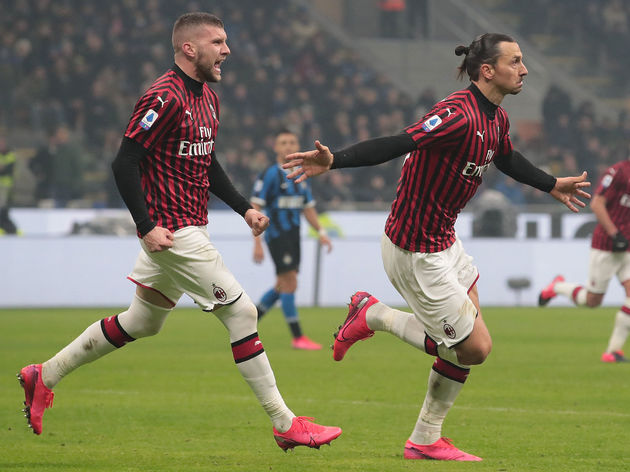 But their front-line bristling with attacking threat (and a sense of revenge in the former Milan man Higuaín's case) should be too much I Rossoneri to cope with, and Juventus should take an aggregate lead into the second leg when the two reconvene in March.