Inter vs Napoli Preview: How to Watch on TV, Live Stream, Kick Off Time & Team News

​Inter host ​Napoli in the first leg of the semi-final of the Coppa Italia on Wednesday evening. It represents the last chance saloon for silverware for the Neapolitans, while Inter continue their crusade on three separate fronts.

After the winter break, fixtures in Italy come at a relentless pace, with both sides playing in their eighth game in the space of a month. Does that favour Inter with their brigade of ​newly-acquired English exports? Or can Gennaro Gattuso galvanise his underperforming side to showcase the quality that has made them Liverpool's European bogey side?

Lautaro Martinez is available following a three-match suspension and is likely to immediately make his return to the starting eleven.

The 22-year-old has been in brilliant form this season, creating a simpatico relationship with Lukaku, and his form has resulted in him being linked with ​a summer move to ​Barcelona. A hairline fracture ruled out Samir Handanovic from playing in Sunday's Derbi della Madonnina so Daniele Padelli is expected to continue in goal.

The final piece of good news for Inter is the return Alessandro Bastoni from suspension. The only positive news from Napoli's shock loss to Lecce is that they incurred no new injuries.

Recently, ​Inter have the upper hand over their Neapolitan rivals, having won three on the bounce against them.

Overall, it's a different story. The two sides have faced each other 29 times, with ​Napoli holding the advantage with 12 wins to the Nerazzurri's 10. Their previous clash this season saw a comfortable 3-1 Inter win at San Paolo in Naples. ​Lukaku stole the headlines that night with a brace and could threaten to do the same here.

​ Milan at San Siro, sending his side top of the table. The win on prime time television was the kind of performance to illustrate that Inter are a club on the rise. Zlatan Ibrahimovic threatened to make a case for still being the face of Serie A, with the Swede instrumental in securing the Rossoneri's 2-0 advantage.

However, Inter ran rampant in the second half, hitting four goals without reply. It took the Nerazzurri to the top of Serie A, level on points with Juventus, with Lazio a point behind. 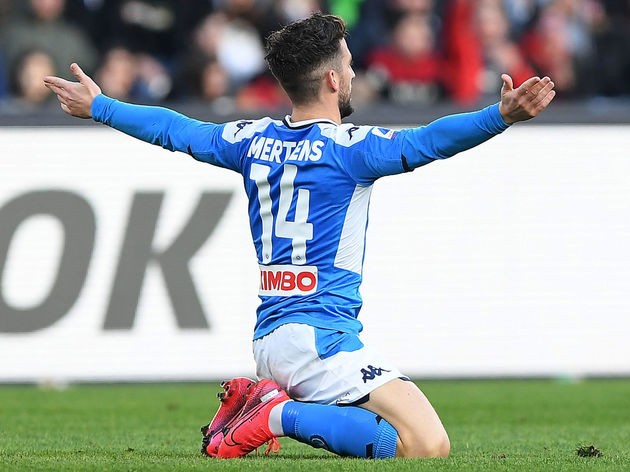 Sunday's shock home loss to relegation-threatened Lecce has set back the momentum of three straight victories.

However, it needn't be all doom and gloom. Napoli sit only four points off the final Europa League spot and a win here in the Coppa Italia could reignite their season.

Napoli were unlucky to lose to Lecce, who hit the home side with a streak of ruthless finishing. It's been evident that Gattuso has infused his side with brightness and enthusiasm to attack, so expect this game to be a closer one than it appears. Napoli have been unable to defend so expect Inter to score, perhaps late as they've often done this season.