​In two of Europe's most dominant footballing nations, their respective league's were monopolised by two supergiants in the 2010s.

Much like Andrew Carnegie and John D. Rockefeller monopolised the steel and oil industries in 19th century America, Bayern Munich and Juventus have had a stranglehold on the Bundesliga and Serie A for the past decade.

The last time we saw either of the aforementioned sides fail to top their division was way back in 2012. But in the space of a few hours on Sunday night, a pair of 'underdogs' proved that the two dictators - in the nicest sense of the word - could be brought to their knees come May.

And after an opening 45 minutes of Leipzig midfielders chasing Thiago's shadow and the hosts working their way to Peter Gulacsi's goal at worrying regularity, Bayern looked set for victory.

The only issue, however; it was still 0-0 - with a combination of heroic defending by Leipzig's back three and good fortune being the major factors for the first-half stalemate.

The second period though, was a completely different story as Julian Nagelsmann's tactical versatility came to the fore once more.

Die Roten Bullen switched from a 5-3-2 to a 4-4-2 to deter the threat posed out wide by the home side - mainly from Alphonso Davies down the left. Overall, it worked a treat with Bayern's danger from wide areas brought to a standstill, creating just one high-quality chance in the second half, an opportunity spurned by Leon Goretzka after some neat interplay between the German and Robert Lewandowski saw the former one-on-one with Gulacsi.

In possession, Leipzig continued to take the direct route - attempting to expose the void left in behind by Bayern's advanced full-backs by turning the ball over in their own half. And within 25 seconds of the restart, Marcel Sabitzer should've given his side the lead but instead blazed over, despite the Austria international enjoying the freedom of Bavaria inside the Bayern box.

Nevertheless, it was a glorious chance created as a result of Tyler Adams and Timo Werner exploiting the void left by a surging Davies.

Their second fantastic chance of the half came 15 minutes later, with the same ploy working a treat once more. This time Konrad Laimer - who was majestic in the second-half, slowing down Thiago and finishing the game with the most combined tackles and interceptions on the pitch (eight) - set Christopher Nkunku on his way in the left channel with a fantastic pass in behind Benjamin Pavard.

The Frenchman then presented the deadly Werner - who'd similarly exposed Bayern's high line - with a seemingly unmissable chance from inside the area. The ruthless German, however, fluffed his lines when it mattered most, placing his first-time finish wide of Manuel Neuer's post.

So with both sides as equally wasteful, a stalemate it was - which absolutely nobody saw coming - and Bayern's lead at the top remained just a point. Nonetheless, Leipzig's impressive second-half display could turn out imperative when it's all said and done. 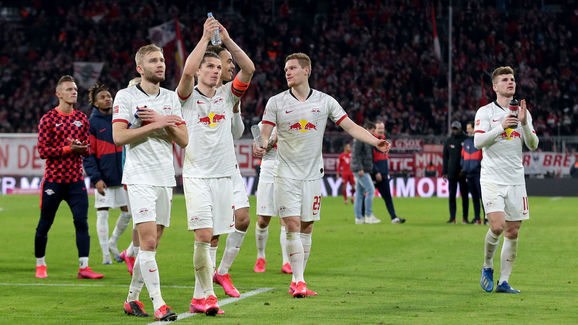 Next up, Inter, who would regain top spot in Serie A with a victory in the Derby della Madonnina at the expense of Juve - who slipped up at Hellas Verona on Saturday night, losing 2-1.

But after a first-half of Milan superiority and outright domination, things looked bleak for the Nerazzurri at the break. A 2-0 deficit to overcome, Juve's monopoly to halt and most importantly, a cringy Zlatan Ibrahimovic tweet to avoid post-match - an image of the Swede posing with a crown to go with the caption "The King Has Returned" seemed inevitable.

And while a tactical switch set the precedent for Leipzig's significant second-half improvement, Inter's superb display at San Siro in the second period was, simply put, down to work ethic. The Nerazzurri players inspired by what would've been a passionate, to put it lightly, team talk by Antonio Conte at the break.

Diego Godin returned to his 2014 best, Stefan de Vrij proved why he's the best defender in the division while Marcelo Brozovic showed just how crucial he is to Conte's side - operating as the most advanced midfielder out of possession to prevent Ismael Bennacer from controlling the game, while also acting as the deep-lying 'regista' when Inter had possession. With the Conte press returning in the second period, Inter ensured that Milan

Inter's newfound intensity, desire and determination laid the foundation for a gargantuan comeback. Oh, and it's fair to say that the whole 'momentum' thingy played a bit of a role as well after Brozovic had sweetly struck home a volley to leave the score at 2-1 just six minutes after the restart.

Whether it be Alexis Sanchez's perseverance and awareness to set up Matias Vecino for the equaliser or de Vrij stretching his neck muscles to the limit to ensure Inter took the lead, it was mightily clear just how much a derby victory and ultimately, toppling the Bianconeri means to the Inter squad.

The celebrations after Romelu Lukaku's header to make it 4-2, meanwhile, highlighted just how motivated this unit is. They're ready to take over.

With their impressive second-half display ensuring they held Bayern to a 0-0 draw on the road, Leipzig will be hoping that they've turned another corner after a patchy run of form while halting the Bavarian's momentum in the process.

As for InterSunday's games were a taster of what these two challengers can achieve with two fantastic managers at the helm; with Conte's pragmatism and Nagelsmann's innovation potentially laying the foundations for a new dawn in Italy and Germany at the start of the 2020s.