Rest, Recover & Reset - The Winter Break Has Come at the Perfect Time for Wolves

​At the halfway point of the season Wolves, simply put, were flying.

They'd just come from behind to beat reigning Premier League champions, Manchester City, and sat fifth in the table, two points off Chelsea and the allure of Champions League football.

Fast forward six weeks and while their overall standing in the table hasn't been irreparably damaged - they've dropped to ninth and are six points off fourth - Wolves went into the winter break with the second-worst league form since the City win. With one victory from their last six Premier League games, along with an FA Cup exit at the hands of Manchester United, Wolves' shocking run of form is only trumped by Crystal Palace, who recorded their seventh consecutive winless game before their own winter break.

As with many slumps in form following a seventh place finish (*see Burnley last season*), involvement in Europe's second-tier competition was the first argument to be raised in defence of the team in question.

So far this season, ​Wolves have had a rather tumultuous relationship with the Europa League.

The Midlands club have won ten of their 12 games in the competition but the six qualifying matches they had to navigate before September were blamed for their slow start to the Premier League campaign.

And as they prepare for the round of 32 against Espanyol later this month, the theories that the competition is hampering their league campaign will continue to surface as fatigue has been the main excuse many have raised in response to Wolves' recent slump. Tiredness is certainly going to be a factor for a side that has already notched up 42 games (a tally only ​Liverpool can match in England's top flight this season) but is it fair to condemn Wolves' fitness in search of an explanation for this dip?

Wolves are a club with great ambitions and the means to go about achieving them. Not many sides with several seasons of top flight football and funding under their belt have gone into a European campaign as well-prepared as this Wolves team (*again, see Burnley last season*), let alone a club with one year of Premier League football since 2012.

Possessing the ability to compete on multiple fronts requires immense planning and cohesion amongst the many tiers of the club and Wolves' charismatic manager epitomises their dedication and professionalism.

Having witnessed one of the most momentous results in the recent history of Wolverhampton Wanderers when his side prevailed 1-0 away to Besiktas in October, Nuno Espírito Santo was asked about the elation in the dressing room and the message he had delivered to his players.

Without a moment's hesitation, Santo replied with the single word: "Recovering," as quoted by ​The Athletic. This simple response is the perfect example of Wolves' determination to eliminate fatigue from the possible hurdles the club can stumble over in their pursuit of success.

But it's not just talk. To combat aches, pains and little niggles players pick up over the course of so many matches, Wolves use

While playing the equivalent of a full Championship league season by February is likely to take its toll, Wolves have done almost everything in their power not to let these extra fixtures impact their league form.

And in some ways, the benefits of all this planning and preparation are there to be seen.

This season no club has used fewer players than the 20 fielded by Wolves. The team would simply not be able to function and perform to the level they do, with such a small squad, if the squad management was anything other than impeccable. To further support the idea that Wolves are not desperately suffering from fatigue just take a look at their superb record in the final 15 minutes of matches.

One might imagine that a side faced with the pile of fixtures Wolves have already undertaken will be susceptible to late goals: as their legs get heavy, they let their runners slip by and concede at the death. But this hasn't really been the case.

In the final 15 minutes of games this season, Wolves have conceded five goals, a figure only three sides in the league can better. And in this recent poor run, only ​Roberto Firmino's 84th-minute winner came after the 75-minute mark.

Interestingly, this final quarter-of-an-hour has not only seen Wolves keep a tight ship, but take advantage of their opposition's tiring bodies as they have scored 12 goals in the closing stages - only Manchester City can boast more.

While it looks as if Wolves have been able to hold off the effects of fatigue late on in games, it seems as though their slow starts have been the real cause of their issues. 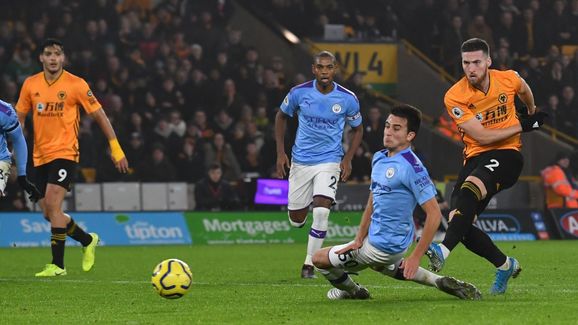 In all but one of the six games during this poor run of form, Wolves have conceded the first goal of the game (in the first half). With these early set-backs acting as the peak of an ongoing trend this season.

No side has gone behind in more matches than Wolves this campaign (18) and while they can also lay claim to the most points gained from losing positions (18), they can't recover from every deficit.

Obviously, fatigue has played its part but the bigger issue Wolves need to address over the winter break is their consistent concession of the game's first goal. If you perennially go 1-0 down, all the NASA gear in the world isn't go to help you.