​Graham Potter's arrival at Brighton signalled the start of a new era.

Gone were the days of attritional, mind-numbing football, as the Seagulls entered a brave new world, determined to become effective and easy on the eye after last season's flirt with relegation. 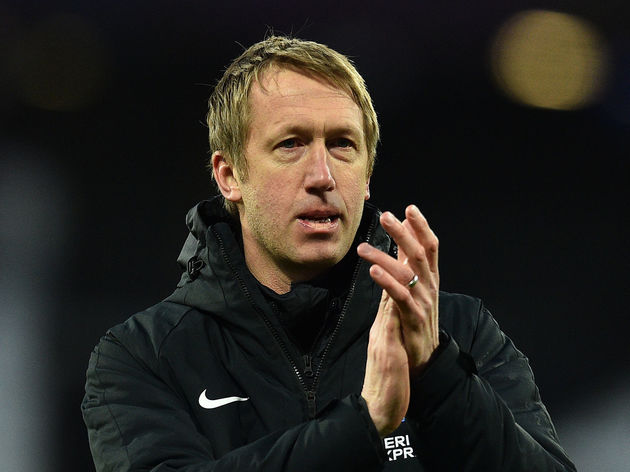 Potter had done good things with Swansea on a limited budget, and he quickly set about changing the ethos at the Amex Stadium, while supporters waited impatiently to discover how their new-look side would fare this term.

The new coach's reign couldn't have got off to a better start, dispatching of a confidence-shot Watford by a three-goal margin at Vicarage Road. Brighton fans were in dreamland - their prayers had been answered.

Less than six months later however, it seems that they've been placed on hold by the almighty, who is no longer blessing them with the results to match their early promise. Despite encouraging signs in the opening weeks, the Seagulls have slipped down the table, and find themselves in the midst of a brutal relegation fight.

And, if the stark contrast to their early season form needed highlighting further, Potter's men took on Watford on Saturday afternoon - the team they had blown away back in August.

The difference in displays was damning. The style remained, but the confidence and precision was lost. The swagger that came from distributing the ball from the back had been replaced by a cyclical nervousness between fans and players alike, who put each other on edge with their respective groans and errors.

And if there was one word which could suitably summarise the Seagulls' attacking contributions, it'd be 'toothless'. Faith has waned in the talented yet streaky striker Neal Maupay, and in one of the clearest signs of reverting to the norm, Potter reinstated the experienced but ageing Glenn Murray back into the fold.

The 36-year-old is still a fox in the box and can sniff out a goal when presented with the opportunity, but he fails to fit into a system which demands a forward who can stretch defences with pace and tireless running.

Potter threw Maupay on in the second half, and the team looked much livelier with the Frenchman in the side. Another of Potter's ambitions was to build a flexible team who could fluidly switch from one formation to another in-game, whilst also providing the opportunity to decide on his side's setup based on the strengths and weaknesses of their opposition.

Whilst ​Brighton have taken to the field in a number of different systems, it remains to be seen whether it has any positive effect on their performances. The Seagulls often look disjointed and confused, and for all the willing buildup play and crisp passing in the midfield, there is still a serious lack of cutting edge in the final third.

Problems all over the pitch, then.

Meanwhile, Saturday's result demonstrated just how effective a 'back to basics' approach can be in the top-flight, as Nigel Pearson's ​Watford scrapped, fought and battled against the Seagulls, and were very unfortunate not to claim all three points.

Potter will be keen for supporters to keep the faith in his style of play, but the fear of relegation may drive Brighton fans to wonder if boring old survival was really that bad.