30 Most Overpowered Players in FIFA 20

EA Sports. It's in the game.

Those six words are recognised by football fans across the globe in an instant. Six words that signify a battle cry, readying players for the war they are about to enter from the edge of their sofa.

In an ode to the iconic series, 90min count down the 30 most overpowered players on FIFA 20 and, to keep a somewhat level playing field, this list is comprised of players' standard in-game ratings. We open up this list with arguably the most overpowered sub-65 rated player you are ever likely to see.

Plying his trade in the Swiss Super League with FC Zürich, Kharabadze possesses some a lethal combo of speed and strength, with stats of 80 and 71 in the pace and physical department. It's a shame this guy isn't Brazilian because he would be a huge asset in a FIFA 13 'Brasilver' side with a whopping 84 sprint speed and 92 jumping.

Instead, he plies his trade in south-east London with Charlton Athletic so his pace can be abused by Addicks fans to their hearts' content. Etebo is now an option for budget La Liga squads after a loan move to Getafe from Championship strugglers Stoke City.

For a 72-rated midfielder, the Nigerian has some extremely well-rounded ratings: none of his pace, dribbling, or physical stats are below the 75 mark. 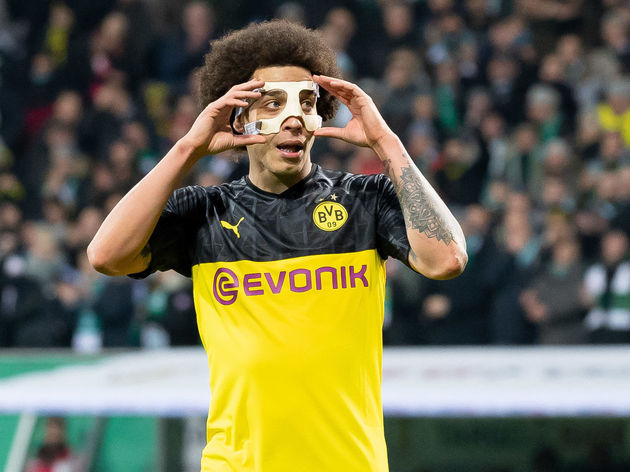 The Belgian has been a staple of FIFA players' teams since he broke through at Benfica back in 2011.

Now with Borussia Dortmund almost a decade on, Witsel remains a renaissance man in the franchise, his lowest stat being his pace 73 while also possessing four-star skills and a four-star weak foot. Although he hasn't really hit the ground running since his big-money move to Real Madrid from Lyon last summer, Mendy can do wonders for the left side of your defence thanks to a lethal blend of 89 pace and 81 physical ratings. Spurs fans must be wishing that Sissoko could live up to the generous ratings given to him by EA.

An all-action midfielder who can push any player off the ball with 90 strength, he is the type of midfield general every player needs at their disposal in an effort to stop pace-abusers and snuff out lightning-quick attacks. Another jack of all trades in the middle of the park, Idrissa Gueye has the ability to dictate both sides of the ball with a solid blend of passing and defensive attributes.

Often overlooked by many observers because he didn't ply his trade for one of the 'big six' clubs, Gueye's performances in the Premier League merited a summer switch to French giants PSG. If you are looking for an option to stop sweaty strikers like Aubameyang, Jesus and Aguero but you can't afford the human wall that is Virgil van Dijk, look no further than Joe Gomez.

The young Englishman has rocket-fuelled feet for a centre-back, with 85 sprint speed, though this is somewhat overshadowed by a harsh physical stat of only 76. This man is the midfield anchor to do everything for you.

Allan has only one of six stats below 75, with his shooting ability carded at 71, which is still nothing to be sniffed at for a defensive midfielder. The Brazilian is definitely one to be part of a filthy META team on the road to division one. Before we take a closer look at his unbelievable pace, remember that Morales is 32.

At 32, Morales aforementioned pace comes in at an astonishing rating of 89, while also having 88 dribbling and 83 finishing. You would be fool to ignore the mouth-watering prospect of playing Morales up front. Dortmund centre-backs being beasts on FIFA goes back a long way. Before Akanji, there were Mats Hummels, Neven Subotić and Felipe Santana.

The Swiss international might be the best of the lot though: 85 sprint speed, 84 strength and 79 long passing. Pace, power and filthy over-the-top through balls, what more do you need from a centre-half on this game? Credit Lucas Moura for being the only man to inject any emotion into the otherwise boring bumble that is Jermaine Jenas on commentary, thanks to *that* goal versus Ajax.

At a mark of 92, Lucas' pace is there for all to see but what makes him so lethal is his finishing (82) combined with 87 dribbling. Good luck getting the ball off this guy. Like Dortmund defenders, Porto forwards have an elite history throughout the various FIFAs over the years.

Vincent Aboubakar, Hulk and Jackson Martinez are all names that take us down memory lane but Moussa Marega brings us right back to the present. Is a combination of 88 pace, 90 strength and 84 shot power even fair? I simply cannot think of Quincy Promes' name without the image of quince jelly.

That is, until I used him on FIFA 20 because much like his almost-eponymous jelly, I just kept coming back for more. 91 pace, 80 finishing and five-star skills are just such good attributes that it would rude not to put them to use. The halfway point of the list is ear-marked by a Portuguese pace-merchant.

There is some serious speed to burn in La Liga, Gonçalo Guedes being one of the better players on show. Despite being somewhat of a one-trick pony, having a pop at goal is always worth it with Guedes, thanks to his 84-rated long shots. Heading back to the stats, Saint-Maximin does not disappoint. 93 pace, yes please. 86 dribbling, yes please. In the words of the ridiculous Andy Tate: 'Thank you and good night'. The young Brazilian has all the attributes to be a top-class centre back on FIFA, and he is still only 21 years of age.

86 jumping and 80 sprint speed mean that it's a tough challenge to find a way past Militão, and he will only get better as the years go on. One of the players to watch over the next decade. Users of Career Mode will be familiar with this entry.

Still only 25, Williams is surprisingly good at covering every aspect of the game considering the fact that he plays as an out-and-out striker. Not just the possessor of blistering pace, the Spaniard also has 85 strength and 88 jumping. Good luck stopping him inside the 18-yard box. Rashford was criticised by many for not having had a prolific campaign in front of goal since he broke into the United side four seasons ago - and, oh how that's changed this season.

An impressive 88 shot power to go with 94 sprint speed means you'll be ok to steer clear of the finesse shot with the England frontman who can bag goals for fun in-game. Don't let the base rating of 72 shooting put you off the Dortmund starlet.

He has 78 finishing, which will come into good use thanks to his ability to breeze past defenders with 92 dribbling and 90 balance. He has five star skills for all of you showboaters out there Never did it occur to me that a Gregg Wallace remix could be referenced in a FIFA article.

Adama has taken a step up to the next level for Wolves this season, but he must deliver in front of goal more often to bump up his admittedly awful 60 shooting. Time for some target practice, Mr. Traoré. He is hot stuff on FIFA, however. This far into the list there are some eye-popping stats and Sané is no exception with 96 sprint speed and 88 dribbling. The Arsenal frontman has been a nightmare to defend in FIFA for years now. Remember his partnership with Adrián Ramos back in FIFA 15?

Aubameyang hasn't lost a yard of pace since then, still being one of the fastest players in game with 94 pace. Combine that with 89 finishing and you have yourself an almost unstoppable striker. The Belgian has stayed largely injury-free this campaign, pulling the strings for a City side who have bottled the chance at a triple crown of Premier League titles.

Still, De Bruyne wreaks havoc in the e-sports arena thanks to his beastly 91 overall rating. Only one of his passing stats is below 85. Pinpoint precision awaits. Jesus is the highest Premier League player on this list for two reasons.

Firstly, in Ultimate Team, he's great value and if you switch over to Career Mode, he is only 22 years old at the start of a new sim. He may not have the highest stats in any one category, but he is still an absolute beast online thanks to his 84 finishing. King Lionel (sorry Mr. Ritchie) has only attribute below 90 in the dribbling or passing categories to go with 95 finishing. If you miss a chance with Messi, you have been cheated by EA. Ronaldo beats his contemporary rival to second spot on this list thanks to his superior aerial ability.

The Portuguese great has 89 heading, 94 finishing and still possesses 90 pace despite recently celebrating his 35th birthday. 93 rated at 35 years old just demonstrates the physical freak this man is. Yes, he isn't statistically superior to Ronaldo or Messi in anything but pace yet we all know that pace wins you FIFA matches, love or hate EA for it as you please.

Mbappé is still only 21 too so he will only get better and better at finishing chances. Mind you,

89 finishing is already outstanding. This kid is a generational talent, now he just has to get some luck in the Champions League with European chokers PSG.