​It's a top-of-the-table clash in the Bundesliga on Sunday evening as Bayern Munich take on RB Leipzig at the Allianz Arena.

Die Roten Bullen ended the Hinrunde four points ahead of the Bavarian giants and two points clear at the summit. A slump in form, however, has seen Julian Nagelsmann's men slip to a point behind Bayern at the top, who've continued their renaissance under Hansi Flick at the start of the Nevertheless, with both sides' form at opposite ends of the spectrum, Sunday's encounter promises to be an intriguing one, and one that will go a long way in deciding who's lifting the

With Javi Martinez (thigh), Niklas Sule (knee) and potentially Jerome Boateng (back) out for Sunday's clash, we could see Frenchman Lucas Hernandez return to the starting XI for the first time under Flick. The two sides have played each other just nine times in total, with Leipzig's first season in the top flight being in 2016/17. Bayern have won five of the nine clashes, compared to Leipzig's one victory. The reverse fixture back in September saw the two sides play out an entertaining 1-1 draw. Bayern - under the stewardship of Niko Kovac - took an early lead through, of course, Lewandowksi before Emil Forsberg levelled from the spot in first-half stoppage time.

Despite Bayern's superiority, Die Roten Bullen certainly highlighted that the Bavarian's weren't going to have it all their own way this season.

Bayern have been in ruthless form since the turn of the new year - scoring 16 goals in their last four games. It's a run that included, arguably, their most complete performance of the campaign thus far - a 5-0 win at home to David Wagner's Schalke.

Flick has helped Die Roten return to a level we haven't seen since the Pep Guardiola era and now, they look destined to win their eights successive 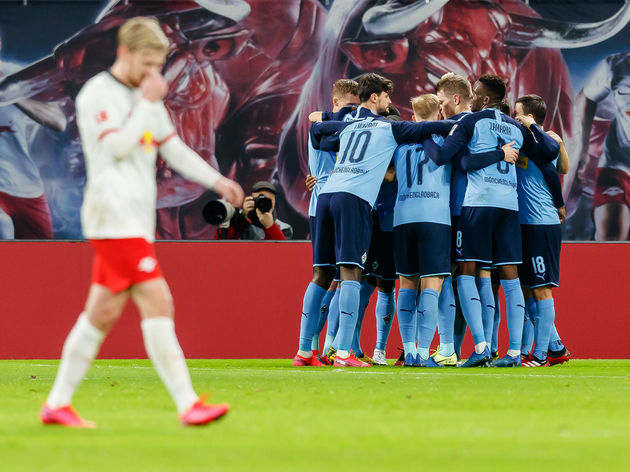 Leipzig, meanwhile, are winless in their last three.

The visitors' use of a 3-4-1-2 surprised the hosts and allowed the Foals to build-up from the back with relative ease while their man-oriented press often suffocated Leipzig deep in their own half. It was these two ploys that led to the away side taking a 2-0 lead in the first half.

Alassane Plea's sending off saw Die Roten Bullen improve in the second period as they began to exploit their man advantage - eventually getting a late equaliser through a wonderful strike from Christopher Nkunku after Patrik Schick had pulled one back before Plea's dismissal.

Nevertheless, here's how both these sides have fared in their last five outings.

Despite the home side being heavy favourites, Nagelsmann's tactical versatility and ability to adapt means you can't completely rule out the out of form visitors.
Nevertheless, with the likes of Alphonso Davies, Thiago, Thomas Muller, Leon Goretzka and Lewandowksi are all enjoying fantastic spells of form at the moment, Bayern
You can expect Leipzig's directness and verticality to cause to hosts a few problems, however, and it wouldn't be surprising to see a thrilling, high-scoring encounter on Sunday evening.
Prediction: Bayern Munich 4-2 RB Leipzig
Related Topics:
Transfer News