Pep Guardiola and his Manchester City side will look to return to winning ways when they host West Ham in the Premier League on Wednesday.

After their previous 2-0 loss to Tottenham, City find themselves a staggering 25 points behind runaway leaders Liverpool. Following such a disappointing defeat, three points is simply a must for Guardiola's men - although it is certainly too little, too late for their title hopes. Recent developments have also rocked City, with the ​news that they will be banned from UEFA competitions for two years over Financial Fair Play breaches shocking the football world.

Ahead of their visit to the Etihad, David Moyes' West Ham are in a perilous position. Without a win in their last five league games, the Hammers have slipped into the relegation zone, now a point from safety. Their most recent game was one to forget, as they let a 3-1 lead slip to draw 3-3 with Brighton.

The defeat at Spurs came at a further cost to City, with forward Raheem Sterling suffering a hamstring injury. He is out of Wednesday's game and will likely miss the clash with Leicester, but could be back to face Real Madrid.

Raheem Sterling will miss our game against West Ham this weekend after scans revealed he has suffered damage to his left hamstring.

Everyone at City wishes @sterling7 a full and speedy recovery  pic.twitter.com/fVIgTtwTfW

Defenders Aymeric Laporte and Benjamin Mendy could return to the starting XI against the Hammers after both miss the Spurs defeat, with Mendy likely to replace the suspended Oleksandr Zinchenko.

Though back in training, Leroy Sané is not yet fit for selection.

David Moyes has no fresh injury concerns ahead of this one. West Ham could be boosted by the return of Felipe Anderson, who has been sidelined for the last three weeks with a rib injury.

Andriy Yarmolenko and Jack Wilshere, the latter of whom recently had surgery on a hernia, remain long-term absentees.

​City boast an excellent record​ against the Irons. When they met in the opening fixture of the season, City romped to a 5-0 away victory with Sterling scoring a hat-trick. In their last five meetings, the Sky Blues have a 100% record, but the last two at the Etihad have been close affairs. City scraped a 1-0 win last year and a 2-1 victory the season before.

Both sides failed to record wins in their last Premier League outings. City's loss at Spurs was their first in five, having beaten Everton, Aston Villa, and Sheffield United in the league since the turn of the year. They also drew with Crystal Palace. 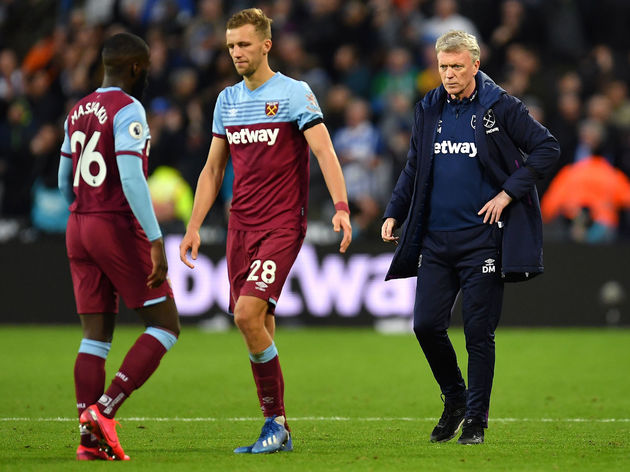 ​West Ham's run of recent results has been woeful, only managing two points from a possible 15.

Here's each sides' last five fixtures in all competitions.

Of late, Manchester City have struggled to replicate the scintillating title-winning form of last season. However, they will be licking their lips over the prospect of a visit from West Ham, who they hold an excellent record over.

West Ham will be praying they can grab something from the game, but a heavy defeat would heap further pressure on David Moyes, and leave the club flailing dangerously low in the league standings.