It was the away side who took the lead, with Odegaard tapping the ball into an empty net following a good save from Alphonse Areola. Isak thought he had got his name on the score sheet shortly after half time, only for his well-taken goal to be ruled out by VAR for offside. 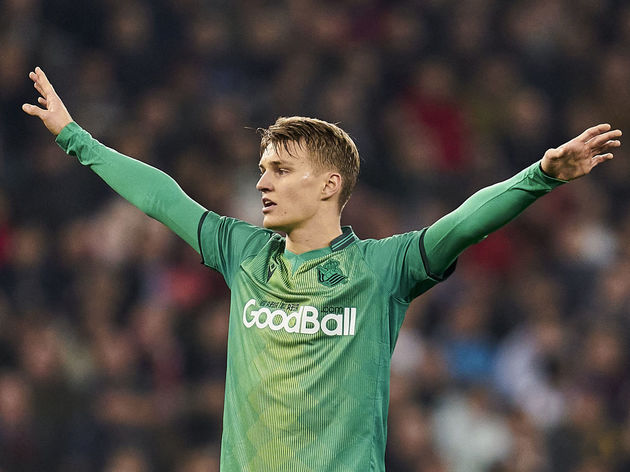 He did get the goal he deserved soon after, however, as Ander Barrenetxea skinned Nacho and played a cross just behind the striker, who adjusted his position well and brilliantly volleyed into the far corner.

Just minutes after bagging his first, Isak found himself in acres of space inside the Madrid penalty area and slammed the ball into the top corner, leaving Areola with no hope to put Sociedad three goals up.

Marcelo reduced the deficit three minutes later when he drove the ball in at the near post, helped by some suspect goalkeeping from Alex Remiro. The visitors regained their three goal lead ten minutes later, however, as Isak played a wonderful ball across the Madrid box for Mikel Merino to stroke the ball into the bottom corner. Vinicius had a bundled header disallowed, but would tee up Rodrygo soon after who tapped into an empty net. Sociedad's advantage was soon reduced to one when Benzema, who had an uncharacteristically quiet night, reacted to a parried shot and chipped the ball for Nacho to head home with conviction.

Though Andoni Gorosabel was sent off during an exciting period of added time, having struggled to cope with Vinicius, Los Blancos couldn't force the equaliser and will now look to La Liga and the Champions League as possible trophies to collect between now and the end of the season.

An exit from the Copa del Rey for ​Madrid was unexpected to say the least.

Their lack of defensive shape will worry Zinedine Zidane, as his side were exposed without Raphael Varane and Casemiro. Isak was able to beat Sergio Ramos and Eder Militao rather easily all evening, as both struggled to handle the target man. Their lack of fixture congestion will work in their favour, as it could prove to be a catalyst for a Champions League run with the majority of the squad set to be well-rested, but this exit will certainly be disappointing for the squad. The main talking point for Sociedad will be the opening goal from Odegaard. The boy-wonder is on loan from Madrid and has been a standout performer during his side's cup run, as well as their hunt for Champions League football.

You'd think there would be little chance of him leaving the Bernabeu next season following a display that contributed heavily to knocking his parent club out of the tournament. Sociedad now have a semi final to look forward to, and with Isak and Odegaard looking sharp they can start to believe that they could go on and win the competition.

This is a real tough one, as Sociedad had some excellent performers on Thursday night. Odegaard stood out, however, as he played like he had a point to prove.

He scored the opening goal at the Bernabeu and looked capable of making things happen whenever he picked up the ball. Zidane will have watched on with both dismay and excitement as the Norwegian outshone Toni Kroos, Federico Valverde and Luka Modric, all midfielders who boast significant class.

If displays like this become the norm, he will undoubtedly become a huge star in the future.

Real Madrid head to Osasuna on Sunday before welcoming Celta Vigo to the Bernabeu, as they look to extend their lead at the summit of La Liga.

The away side host Athletic Club in their next fixture​ and then travel to Eibar as they look to build on this encouraging victory.