UEFA have belatedly acknowledged a string of 'arbitrary blunders' in Chelsea's 4-4 draw with Ajax in the Champions League in November, a result that indirectly led to the Dutch side being knocked out of the competition.

Referee Gianluca Rocchi came under severe criticism after sending two Ajax players off for two incidents in the same phase of play during the group phase encounter, with the Eredivisie champions leading 4-2 at the time.

The dismissals of Daley Blind and Joel Veltman swung the game in the Blues' favour, and they eventually salvaged a point against the nine men courtesy of a late Reece James strike. Rocchi failed to stop play for a blatant second-yellow challenge by Blind as ​Chelsea broke in the 68th minute, then, playing advantage, awarded a penalty seconds later for a perceived handball by Veltman. Rocchi went straight back to give Blind his marching orders and then gave Veltman a second yellow for his involvement in the penalty. High drama.

At a referees' summit in Palma, Mallorca, Rocchi was found to be incorrect on several counts. Dutch publication ​De Telegraaf reports that the officials present were 'almost unanimous' in the opinion that Blind's lunge on Tammy Abraham should have been pulled up instantly, because the player had already been booked and should have been dismissed immediately rather than after an advantage.

UEFA's chief of refereeing Roberto Rosetti is also reported to have insisted that the penalty decision - and therefore Veltman's second yellow - should have been reversed by a VAR intervention, but that wasn't forthcoming on the night. 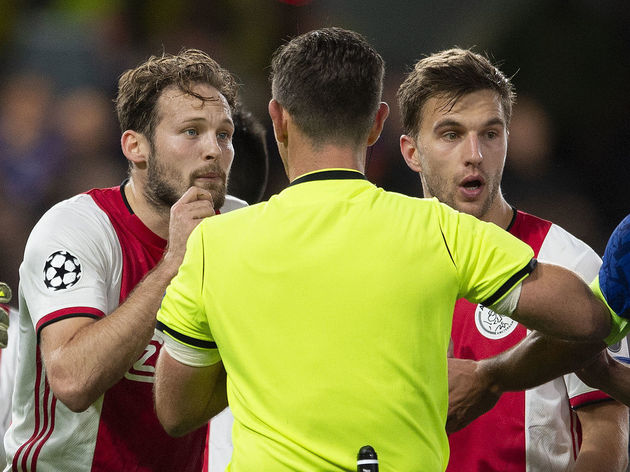 This ruling will be seen as too little, too late for last season's semi finalists, though. The unlikely 4-4 draw ultimately derailed Ajax's ​Champions League campaign, with de Godenzonen beating Lille before losing 1-0 in a winner-takes-all group finale against Valencia, seeing them dumped out of the tournament and into the Europa League.

Ajax won't take legal action over financial losses following the outcome, with CEO Edwin van der Sar describing it as 'hopeless and pointless', as quoted by the ​Mirror.

"The decisions in that situation had so much influence on the game," he said. "And, ultimately, on the final standings in the group. "[But] That is a hopeless and therefore pointless mission."

Their failure to qualify for the last 16 is believed to have cost the club £9m, while a victory on the night would have brought in a further £1m.